The shortlist for the prestigious 2015 RIBA Stirling Prize for the UK’s best new building, now in its 20th year, has been announced on Thursday 16 July. The six exceptional shortlisted buildings will now go head-to-head for architecture’s highest accolade, to be awarded by the Royal Institute of British Architects (RIBA) on Thursday 15 October 2015.

The 2015 RIBA Stirling Prize shortlist features the bold and characterful Burntwood School; a confident and highly-crafted new affordable housing development at Darbishire Place in east London; the modest and calm Maggie’s cancer care centre in Lanarkshire; the structurally-impressive luxury housing towers at NEO Bankside on London’s south bank; an ambitious new library and teaching building at theUniversity of Greenwich and the highly-original extension and refurbishment of The Whitworth art gallery in Manchester.

The shortlist for the 2015 RIBA Stirling Prize is:

Burntwood School, Wandsworth by Allford Hall Monaghan Morris
Bold, characterful new campus buildings with light-filled rooms and corridors add to a sense of this being a very collegiate school.

Maggie’s Lanarkshire by Reiach And Hall Architects
Modest, low building that gathers a sequence of domestic-scaled spaces. Visitors enter via a quiet arrival court, defined by the low brick walls and two lime trees. At once, a sense of dignity and calm is encountered.

The Whitworth, University Of Manchester by Muma
Extension to the 19th century Whitworth Gallery – carefully crafted spaces emerge seamlessly from the existing as an integral yet individualistic part of the whole assembly.

The RIBA Stirling Prize shortlist features exceptional buildings designed for every stage of our lives: housing projects, a school, university, cultural and health buildings have all made the grade and show why the UK’s architectural talent and ambition is famed around the world.

The two education buildings – a suburban secondary academy and a slick new university building on a UNESCO site – will inspire any student lucky enough to learn in them. At the University of Greenwich, the new library, architecture and landscape school is a glamorous and flexible space – it lives harmoniously with its community who can enter the generous gallery, shop and cafe. Burntwood Academy is a huge south London girls’ school; AHMM, arguably the UK’s best schools architects have created a university-like campus building with light-filled classrooms and generous corridors. This project is built to last and adds huge value to the attainment and behaviour potential of its students. This is a model in secondary education design and shows why schools need the best architectural thinking – well-designed schools add long term value and inspire all those who attend and work in them.

On the shortlist are two highly successful dense and compact housing schemes on brownfield sites in London – a Peabody social housing apartment block on a former bomb site (Darbishire Place) and five luxury housing towers on the site of old warehouses (NEO Bankside). Both projects provide the highest-quality housing for the capital’s diverse and growing community.

The final two buildings on the shortlist are highly sensitive and inclusive projects: Maggie’s Lanarkshire cancer care centre is an oasis of calm retreat created in a previously alienating and unsympathetic environment – the corner of a hospital car park. The Whitworth is a tour de force; the extension and adaptation of a 19th century gallery; the project has created an art gallery of truly international standard.

Speaking about the shortlist RIBA President Stephen Hodder, the first ever winner of the RIBA Stirling Prize (for the Centenary Building at the University of Salford, 1996), said:

“The RIBA Stirling Prize is awarded to the building that has made the biggest contribution to the evolution of architecture in a given year.

“Every one of the six shortlisted buildings illustrates why great architecture is so valuable. It has the power to delight, inspire and comfort us at all stages of our lives; to improve a student’s potential to learn, to provide a family with a decent home, and to create a sensitive and uplifting healthcare environment. In the shortlist we have six model buildings that will immeasurably improve the lives and wellbeing of all those who encounter them.

“The shortlisted projects are each surprising new additions to urban locations – hemmed in to a hospital car park, in-filling an east London square, completing a school campus – but their stand-out common quality is their exceptionally-executed crafted detail. From the simple palette of materials used on the Maggie’s Centre, to the huge repeating facades of Neo Bankside, every detail on every building, both internally and externally, is well-executed.

“Not only are these the best new housing projects, school, university, cultural and health buildings in the country today, they are game-changers that other architects, clients and local authorities should aspire to. The RIBA Stirling Prize judges have an unenviable task.”

The winner of the 2015 RIBA Stirling Prize will be announced on the evening of Thursday 15 October at the Royal Institute of British Architects (RIBA) in London.

The 2015 RIBA Stirling Prize jury, who will visit the six shortlisted buildings and select the winner on 15 October, is chaired by Jane Duncan (RIBA President, from 1 Sept 2015), with architects Peter Clegg and Steve Tompkins; and Dame Theresa Sackler, arts philanthropist.

The Architects’ Journal is professional media partner for the 2015 RIBA Stirling Prize. 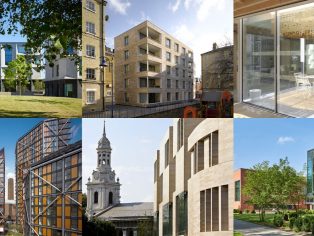 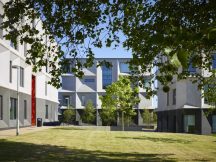 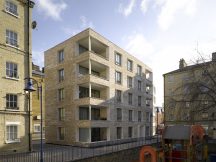 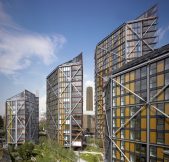