Some 373,000 property transactions, with a total value of £82bn, are on hold after the Government effectively suspended the housing market as part of its measures to control the coronavirus outbreak, according to the latest UK Cities House Price Index by Zoopla – the UK’s leading property resource. The majority of the sales were agreed between November 2019 and February 2020, and would have been set to complete between April and June.

A market in suspended animation

Aside from the 373,000 sales suspended in the pipeline, which may complete later in the year, a handful of sales are still being progressed earlier in the process – with deals being struck Sold Subject to Contract, largely based on viewings and progression of sales that took place ahead of the lockdown. New sales agreed are running at a tenth of the levels recorded in early March, with volumes similar to what you would expect to see in late December. Some buyers seemingly want to press ahead with agreeing sales, encouraged by government support for the economy and low mortgage rates.

The rate of fall-throughs peaked on 23rd March, the day of the lockdown, and has fallen back as the volume of new sales being agreed declines. The outlook for sales progression depends upon how long the restrictions remain in place, the scale of the economic impact, and how this impacts would-be buyers and their ability to proceed with sales.

The rise and fall of housing demand since COVID-19 hit

The demand for housing fell by 70% between the start of March and the week ending 29th March, with the greatest decline recorded ahead of the lockdown. The drop in demand bottomed out in early April and has since started to improve slowly off a low base. Despite a steady increase in buyers looking for homes, demand still remains 60% below the levels recorded at the start of March.

While households are unable to view homes for sale in person, they can still browse online. Browsing of property listings fell in line with demand but to a lesser degree. Levels have bounced back more strongly over the last three weeks, but remain 35% lower than the start of March. 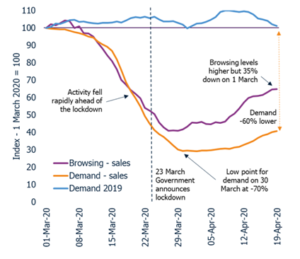 The latest UK Cities Report tracks the fall in demand up until the end of March and the scale of the subsequent rebound across UK cities. The drop in demand as a result of COVID-19 was up to 80% in Cardiff, while Newcastle registered a lower drop in demand (48%) where market conditions were already weaker. Over the last two weeks, demand for housing in cities across northern England has rebounded more strongly – notably in Manchester, Liverpool and Leeds. These are all cities where 2020 started strongly and where housing affordability remains attractive, and where we could see a faster bounce-back when restrictions lift.

By contrast, higher value cities such as Cambridge, Edinburgh and Southampton have not yet recorded any material improvement in demand over the last few weeks. There are still low levels of demand but a limited improvement so far.

Figure 3: Demand by city over lockdown 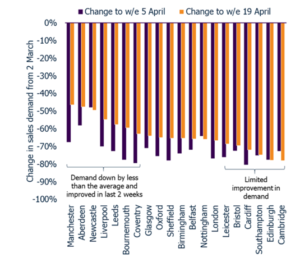 Our latest forecast is that completed sales will be 50% lower in 2020 than 2019, allowing for a proportion of stalled sales to complete and with a delay to sales that would have progressed. The positive news is that the total number of properties for sale is just 4% lower than levels registered at the start of March, as vendors maintain listings, indicating no mass withdrawal. This is critical to ensuring a faster rebound to full market health once coronavirus restrictions are lifted.

The strength of the Index

It is too early to forecast the impact of coronavirus on house price performance in 2020, but the Cities Index registered the lowest monthly growth for over a year at +0.1% – just a third of the monthly growth rate recorded in January and February. The five best performing cities recorded year on year growth of over 3%, with Nottingham leading the charge with an annual growth rate of +4.1%.

Using more data than any other major house price indices, Zoopla’s UK Cities House Price Index is powered by a range of data inputs including agreed and completed sales prices plus independent property valuations registered in March. The index will continue to be published but with limited market evidence greater volatility of results is expected. 75% of the sales data for March was for deals agreed two-four months ago, so it will take time for house price indices to respond. However, this latest index report also incorporates real time market data, recorded up until 19th April, providing one of the most up to date analyses available for housing market trends.

“There is a two speed housing market at present. Parts of the market are at a virtual standstill as a result of the physical restrictions that have stopped new supply coming to the market and the viewing of homes for sale. However, the online browsing of homes for sale and buyers expressing interest in property have been rising off a low base over the last two-three weeks. Demand for housing is still 60% lower than at the start of March, but we expect interest in housing to continue to improve slowly. Northern cities have seen the strongest improvement in underlying demand although levels remain half those at the start of the crisis.

“Sales continue to be agreed in low volumes by purchasers who viewed homes ahead of the lockdown, but there is a large pipeline of agreed sales held up by the temporary suspension of the sales market worth £82bn. In addition, these sales will generate associated spend resulting from housing transactions that can stimulate economic activity.

“Without doubt, once the coronavirus restrictions are relaxed, we should expect the release of demand that has been building since Brexit and political uncertainty destabilised market sentiment. That said, the case for a stamp duty holiday to support a resumption of market activity is clear and a high proportion of savings are likely to be spent, further stimulating economic activity.

“We expect completed housing sales in 2019 to be half of those in 2020, having lost close to two full months of market activity by mid-May, and taking into account time for agents to rebuild sales pipelines.

“Many households have spent more time at home in the last few weeks and some may feel the urge to move and find more space or consider the potential for remote working. This could boost activity in the second half of 2020, but this all depends upon how much the economy is impacted over the rest of the year and the impact on levels of unemployment. It is too early to register any pricing impact given new sales volumes are 90% down on the start of March. Demand is rising but there is a long way to go until we see a return to typical levels of market activity.”