Since reporting on contract awards in April, 33 of those projects have now confirmed to be on hold, at a total value of £178 million.

Commenting on the figures, Tom Hall, Chief Economist at Barbour ABI and AMA Research said, “We expected a large fall in contract awards for April, however we are seeing increasing on-site activity as large of projects re-open. The Infrastructure Sector has been the less impacted than other sectors, leading to hopes of an Infrastructure-led recovery towards the end of the year. We will continue to monitor closely the impact the current situation will have on the future pipeline of contract awards. Nonetheless we expect to see a continued decline in contract awards in the short term.” 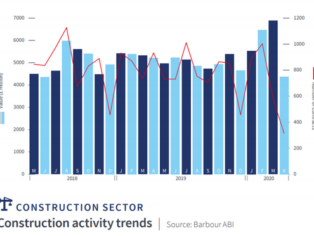