Apprentices audience with the Prime Minister

Three trainees from Redrow were invited to a special reception at 10 Downing Street this week, where they rubbed shoulders with Prime Minister David Cameron and other senior ministers.

Bricklaying apprentice Liam Sargeant, former trainee turned assistant site manager Ashley Terron, both from Warrington, and former Hull apprentice Tom Dixon, all award-winners at Redrow, enjoyed a “once in a lifetime experience” when they attended the reception at the start of National Apprenticeship Week.

The event was also timed for the end of the Government’s specially appointed Housing Week, during which it was revealed by the Treasury that 88,420 people have used Help to Buy to purchase a home since the scheme was launched in 2013; and 80% of them were first time buyers.

“It was a fantastic event and we were very honoured to be invited. While we were there we were told the Prime Minister wanted to speak to us and then he came over for a chat. He asked us about our jobs and what we enjoyed most about our apprenticeships.”

Liam, 19, who works alongside Ashley on Redrow’s New Heys development in Liverpool and is one of the apprentices chosen to represent Redrow in the Brathay Apprentice Challenge this year, added:

“It was a once in a lifetime experience and very surreal. We arrived in private cars and went through all the security at the gates. Once inside Number 10 we were able to look around the building before the reception started. The Prime Minister then came over and spoke to us for a couple of minutes about what it’s like to be an apprentice and how long we’d been working at Redrow.”

“Going to No10 was an amazing experience, it really made me realise what myself and the other apprentices had achieved in such a short space of time. It’s quite surreal though, one day you’re up scaffolding laying bricks and the next day you’re shaking the hands of the Prime Minister!”

Ashley, Liam and Tom were joined at the Downing Street event by around a dozen Redrow homeowners who all purchased using the Help to Buy scheme which, along with providing a boost to people’s buying power, has also been a shot in the arm for housebuilders and helped to generate more jobs in construction.

“I’ve heard so many stories of meeting people who’ve taken part in Help to Buy and so many of them say really the same thing which is, ‘We really want to have a home of our own. We work incredibly hard. We’ve got a decent job. We put in the hours. We’ve got a decent salary. We can afford the mortgage payments. But we can’t afford a deposit because we haven’t got a rich mum and dad and we aren’t able to save up all that money when we’re renting and living where we’re living.’ “And so that’s why I think Help to Buy has made a real difference.

The Help to Buy scheme is available on homes up to £600,000 – although so far the average price of a home bought with Help to Buy has been £185,000 – and allows the purchaser to take out a 20% equity loan, which is interest free for five years. The home buyer’s initial outlay comprises a 5% deposit and 75% mortgage from a lender of choice.

Redrow has one of the industry’s best records for training and developing its staff with 15% of its workforce having official trainee status. The housebuilder ranks in The City & Guilds top 100 apprentice employers in England, as well as the 2014 Building Good Employer Guide, both for the second consecutive year. 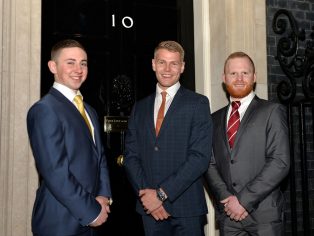