Approved designs can now be shared for the thirteen new luxury homes in Swanland from Duchy Homes as full planning permission has been granted and construction is now underway.

Situated on Tranby Lane in East Yorkshire, on the edge of the Yorkshire Wolds, Cygnet Gardens is a new housing development offering just nine luxury five-bedroom detached homes along with four two-bedroom affordable age-restricted bungalows in the serene village of Swanland.

Cygnet Gardens stands on the site of the house formerly known as White Lodge, previously owned by the respected Runton Waller family who have close connections to Swanland and the Humberside area. Duchy Homes’ new development pays homage to Mr Runton Waller and the renowned late architect’s legacy of superior build quality and design.

Inspired by architecture of grandeur, the Regency-style homes will include columned door canopies, decorative brickwork and deep statement windows with cast stone casings for impact and stature on arrival. The carefully-considered variety of house types with brick and render combinations will provide an exclusive and bespoke-feel to this picturesque setting. Several of the dwellings overlook the new, large public open space area which in turn overlooks the pond that is the focal point of Swanland’s village centre.

Mr Runton Waller’s grandchildren selected Duchy Homes for its highest standards in design, quality and service, saying of their decision to sell the land:

“We have so many great memories of childhood time spent here and we feel it is deserving of a new generation of families to bring life back to this much-loved place.”

Duchy Homes has begun work on foundations at Cygnet Gardens ahead of its anticipated sales launch in Autumn and has already pledged support to the village by sponsoring its annual Swanland Show later this year. 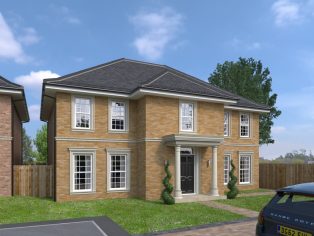