As competition for apprenticeships increases, four outstanding trainees working for homebuilder Redrow have shown what it takes to succeed in the industry.

The developer’s highly contested ‘Apprentice of the Year’ awards for 2014 have been presented to four apprentices who impressed judges with their performance.

South East based apprentice Shane Clarke, and Yorkshire’s Gavin Thistlewood were also highly commended in the year one and year 2 + categories respectively.

Winners were selected based on their individual training progress reports, performance at college and feedback from sub-contractors, site managers and apprentice coordinators who work alongside them on site.

Having been highly commended in last year’s awards, Liam scooped a winner’s certificate this year after scoring top marks every quarter throughout the year. Although only at the end of his second year he has already done everything he needs to secure an NVQ Level 3 – one year ahead of schedule.

He is based at Redrow’s Calderstones Grange development in Liverpool and lives in Great Sankey, in Warrington, Cheshire. After leaving Penketh High School in Warrington with nine GCSEs, he took up a full time college place at Warrington Collegiate to learn bricklaying. With the support of the college, Liam, who also plays rugby league for Oldham under 20s, successfully applied for an apprenticeship with Redrow.

“Being an apprentice is a real eye opener to the industry. You meet new people, learn new skills and gain an insight into other people’s skills as well as your own. And you earn money while you are learning. I love being an apprentice and I’m always encouraging my friends and other students at college to follow suit.”

Daniel became a Redrow apprentice in August 2013, and is undertaking his NVQ level 2 in painting and decorating at Preston College. He works at The Orchard, part of the large Buckshaw Village development in his hometown of Chorley. Older than the average apprentice, he said:

“After leaving school I’d worked mainly in factories and warehouses. Unfortunately I lost my job during the recession and, deciding it was time to retrain, I applied for the apprenticeship with Redrow and thankfully they took me on.”

“I’ve loved every minute of working for Redrow and have worked with some really talented people who’ve helped me to develop my own skills. Everyone here has been very supportive and eager to help. I’m delighted to have been named as one of Redrow’s apprentices of the year, it’s very encouraging and a real boost to my career.”

Working for a FTSE 250 company, Redrow’s trainees work in a face paced, dynamic environment and have plenty of opportunities for career development.

“Our Apprentice of the Year awards recognise the best young talent and I’d like to congratulate all of our winners on their fantastic achievements. Redrow is a highly innovative company with ambitious expansion plans so we’re delighted to have these talented individuals on board to grow with us.”

“We’re committed to nurturing new talent and giving young people opportunities to develop new skills. Around 15% of our employees are trainees and our superior training has earned us a place in the top 100 apprentice employers in England.”

One of the UK’s most successful and acclaimed housebuilders, Redrow constructs around 3,500 premium quality family homes a year in prime locations across England and Wales. The company directly employs around 1,350 people and provides employment for thousands of sub-contractors on its new homes developments.

For more information on how a career at Redrow could be ‘the making of you’ see the website www.redrowcareers.co.uk/Apprentices. 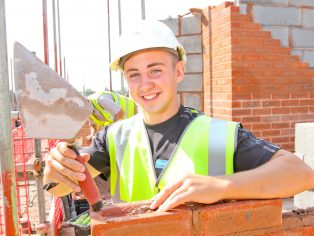 Warrington bricklayer Liam Sargeant, based at Caldertsones Grange in Liverpool, scooped Redrow’s Apprentice of the Year title in the year 2+ category