The site manager in charge of a significant new garden village near Stockport has won two prestigious awards in a matter of weeks from the National House Building Council (NHBC).

Just weeks after this success, he was also Highly Commended at the NHBC’s Health and Safety Awards, which highlights developments showcasing the very best in health and safety practice in the industry. Recognising Mark’s abilities, he has since been promoted to project manager.

The award wins reflect the complex work that Mark and the whole on-site construction team are undertaking to transform what was once the Woodford Aerodrome site into a brand new village, which will take shape over the next decade, complete with 950 new homes from Redrow’s sought after Heritage Collection, as well as a new primary school, investment in local infrastructure and significant amounts of green open spaces.

Mark’s achievement is particularly impressive since he only joined the company one year ago after a 15 year sabbatical from site management, during which he pursued a career in the planning and engineering sectors.

“The whole team is extremely proud of the new development we’re creating at Woodford Garden Village. A Pride in the Job Quality award is one of the highest honours a site manager can receive, so to win in my first year at Redrow and also receive a highly commended award in recognition of the on-site team’s impeccable health and safety practices, is very special. It’s a team effort and I’d like to thank my construction colleagues Alan Kendrick and Liam Sergeant for their input as they’ve had a massive part to play in the site’s success.”

“We’re proud to have an award-winning site manager in charge of one of the largest and most significant new homes developments in the region.

“We are creating a very special new community at Woodford Garden Village and to receive recognition from the NHBC, having only started building work on the development earlier this year, is a huge achievement that the entire on-site construction team and indeed the whole business can be particularly proud of.”

Mark will now have to wait until the autumn to discover if he has made it into the top 130 site managers in the country to secure the NHBC’s coveted ‘Seal of Excellence’. 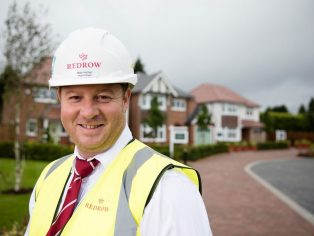