Landmarks (UK) Ltd, a Yorkshire based developer, has used Triton waterproofing systems in the construction of a traditional two storey farmhouse. The property sits on a natural gentle slope, so the basement is fully buried to the rear with a raised patio area to the front.

The property was built using ICF (insulated concrete formwork) where polystyrene forms are used to contain the wet concrete when casting in-situ concrete walls – and are left in place.

The lower slab was made waterproof by the installation of a membrane beneath it and the inclusion of Triton’s TT Admix in the mix. TT Admix contains active chemicals that react with fresh concrete to generate a non-soluble crystalline formation that seals the concrete itself against the penetration of water or liquid.

Triton’s TT Waterstop, a pre-formed water bar which swells up to 350% when in contact with water, was placed into all joints. The shuttering around the slab had made provision for the concrete groove in the face of slab and the TT Waterstop was fixed into the groove using Triton’s TT Swell Mastic expansion sealant. TT Swell Mastic swells up to 100% when in contact with water, and has long lasting adhesive and hydro-swelling properties. TT Waterstop was also placed in the centre of the wall on top of the slab so that the joint between the wall and the slab was protected.

Triton TT Admix was also incorporated in the concrete mix used to form the basement walls.

Externally the basement walls were treated with two coats of Triton TT Vapour Membrane, a ready blended, single component acrylic modified coating, that provided the primary waterproof and gas proof barrier. Platon Double Drain, a membrane that provides a drainage and protection layer, as well as working as a traditional cavity drain membrane, was then draped down the walls to connect to the land drain. 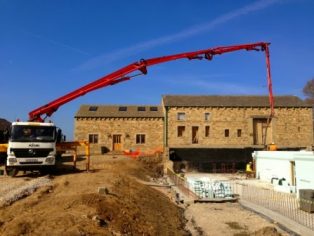