The Bristol Temple Quarter Enterprise Zone (BTQEZ) has attracted 2,000 jobs since being declared open for business in April 2012.

James Wharton, Parliamentary under Secretary of State for Communities and Local Government, welcomed the jobs as he was shown how a new bridge will connect Arena Island with the rest of the enterprise zone.

“Investment and innovation are at the heart of Enterprise Zones and this bridge project is a testament to what can be achieved when the public and private sector work together to support businesses and create jobs.

“Bristol has already seen the benefit of this, with empty buildings transformed into many thriving firms and this bridge will help bring even more prosperity to the area. It is a vital part of the development of the Bristol Arena which is giving the city its first world class entertainment venue.”

The landmark jobs figure incorporates jobs in an impressive range of sectors including engineering, ICT, low carbon and the creative industries.

Businesses of all sizes continue to be attracted to working in the zone – from hi-tech start-ups in the SETsquared business incubator to SMEs such as Kevin McCloud’s HAB Housing to larger companies such as OVO Energy and law firm Simmons and Simmons.

The success of the Enterprise Zone is set to continue, with the number of new jobs forecast to reach 4,000 in 2017.

“I’m delighted that the Enterprise Zone has hit the 2,000 jobs figure to date, and is on a trajectory to create 17,000 jobs and 2.5 million sq ft of employment space. Ensuring Bristol has a world class workforce remains one of my key priorities and the zone is playing a crucial role in ensuring the city region attracts investment and businesses from an impressive range of sectors.

“Arena Island Bridge is the next milestone in the continued regeneration around Temple Meads, which will provide a rich mix of businesses, homes and leisure facilities, not least the long-awaited Bristol Arena with all its spin off benefits.”

During his visit Mr Wharton was also shown how the 63-metre-long, 18-metre-wide bridge will be moved across the water and into place over the next few weeks.

The Homes and Communities Agency (HCA) was given the go ahead by the Government in 2013 to invest £11.3 million in the bridge.

Once completed, the bridge will connect Arena Island – which will house a 12,000-capacity arena from December 2017 – to the city, as well as boosting access to the Enterprise Zone. The bridge will be completed mid-February 2016 with 3.5-metre-wide pedestrian and bike lanes on either side.

District heating pipework will also be on the underside of Arena Island Bridge as the seventh section of an eight-point plan to lay a network of underground pipes and cables in the zone. This will supply both ultrafast broadband and green energy – connecting 100 Temple Street to the core areas of the Bristol Temple Quarter Enterprise Zone (BTQEZ), including Arena Island.

The project is in line with achieving some key objectives of the BTQEZ’s vision for creative, high-technology, specialist engineering and low-carbon companies, building on the city’s reputation as a knowledge-intensive city during its year as European Green Capital.

Colin Molton, Executive Director of the HCA for the South and South West, said:

“The Enterprise Zone is set to create thousands more jobs for the city, but it needs new infrastructure to unlock this potential.

“The new bridge will connect Bristol’s new arena, and a previously isolated plot of land, to the rest of Bristol. This will support a further 2,700 jobs in the area, as well as 300 new and affordable homes. It’s an exciting period of growth for the city, and one that we’re very proud to support.”

Until spring 2015, the HCA owned the former Diesel Depot Site now known as Arena Island. A grant of £5.425 million from the Department of Communities and Local Government (DCLG) allowed the site to be transferred to Bristol City Council for the arena, as well as enabling the council to acquire the former sorting office.

The arena will generate up to 400 jobs and will allow creative digital businesses to move into the zone. Combined with jobs at the nearby sorting office, there is the potential to attract 2,700 jobs and 300 new homes.

The BTQEZ is one of the largest urban regeneration projects in the UK and an example of how such a programme can support growth.

“It’s good to welcome Minister James Wharton to the West of England and to have the opportunity to show him some of the work we are undertaking to drive economic growth.

“In particular, the great success of the Enterprise Zone in providing a focus for new business growth and an exciting gateway to Bristol and the West of England.” 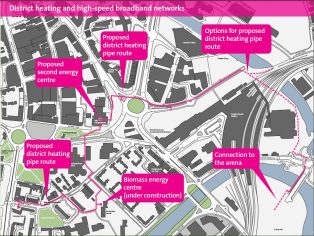