Tom Barnes, managing director at Vastern Timber, looks at the growing use of Thermally Modified Timber and explains how new British products can ensure sustainability for your project

Changing the nature of wood using heat sounds like a very new idea, yet it has been used for many years in the manufacture of musical instruments, where the technique is used to replicate the highly desirable tones and inherent stability of aged guitars and violins.

Due to the many benefits of thermally treated woods, it has become increasingly popular within the construction and interior design industries.

As the name suggests, thermal modification involves using intense heat to change the structural properties of wood. At temperatures of 180 to 210 degrees centigrade the wood’s structure and colour are permanently changed. The combination of high heat and steam ‘cooks’ the sugars and resins out of the wood, leaving nothing for mould, fungus and bacteria to feed on, resulting in significantly higher levels of durability than non-modified timber.

Depending on the intended use of the thermally modified hardwoods, both the temperature and the modification period are varied. For external use, where durability is important, the wood is cooked at a higher temperature (210 degrees centigrade) and for a longer period.

The thermal modification process involves no chemicals and does not rely on impregnating the timber. Unlike most other treatment processes, thermal modification reaches to the core of each piece, rather than simply treating the surface. The most impressive outcome of the thermal modification process is that products are significantly more stable than non-modified timbers, meaning they expand and contract less when faced with changes in ambient temperature and humidity. Additionally, the stability results in significantly less cupping and distortion when used outside. The full modification of thermally modified hardwood allows for cutting and re-working without a loss of performance and without the need for additional treatment.

Thermal modification converts species that would otherwise rot quickly outside into inherently durable products that can be used externally without any further treatment. Tests carried out in Europe have demonstrated that thermally modified hardwoods reach at least class 2, and in some cases class 1 under the EN350 classification system as the intense heat modifies the cell structure of the wood making it highly resistant to all common causes of above ground decay.

Thermally modified hardwoods are also lighter than most natural timbers and other modified timbers, making them easy to move and install. And due to the lack of resins and oils in thermally modified hardwoods, they are relatively easy to work. Tools will stay sharp for a long period of time and will remain clean. The change in structure also results in an excellent machined finish.

These are all compelling performance attributes that have helped to drive the growing popularity of thermally modified timber. How- ever, aesthetics have also been a key factor.

The thermal modification process not only changes the structure of the wood, but also changes the colour to a shade of walnut brown. Thermally modified timber has an exotic appearance similar to tropical species such as Teak and Ipe, but without any of the environmental concerns that come hand in hand with these species.

The shade will depend on the species, the temperature and the treatment period. The colour of modified hardwoods darkens according

to the temperature and length of the thermal process, so timber destined for outdoor applications such as cladding and decking tends to be a darker brown than those destined for interior use. Not only is the colour of products darker, it is more consistent than the original timber and when compared to other cladding species such as western red cedar. External products are best suited to contemporary designs where dark colours and sharp lines are desired.

Anecdotal evidence shows that thermally modified wood silvers more quickly than natural wood. Additionally the weathering is more con- sistent than the more reactive unmodified timbers such as oak, sweet chestnut and western red cedar. The inert nature of thermally modified timber also means that the boards are less likely to react with pollution or become discoloured in shaded areas.

With so much going for thermally modified timber, it would be easy to think it is a problem-free solution. However, there remains an issue regarding sustainability as, until recently, thermally modified wood was only available as an imported option.

There will always be a question mark over the sustainability of imported timber. People increasingly expect to extract the full sustainable value of the wood they use, yet importing timber will always devalue its sustainable credentials. The actual transportation of thousands of tonnes of timber across the globe has an obvious environ- mental cost, although it is fair to say it is less than most people would expect. The real concern lays in the origin of the raw product and whether it is truly sustainably and responsibly sourced, and whether its production benefits local communities. But perhaps the key issue surrounds our own native forests and woodlands and the communi- ties here in the UK which have been negatively impacted by the growth of imported timber.

Now, the first commercially available thermally modified British timber range has been developed to expressly address this situation. Creating value for our domestic woodlands and the principal of local sourcing has been a central driver for development of the product and all timber used originates in British woodlands, as Dougal Driver, Director of Grown In Britain explains:

“If we want to improve and protect our woodlands we need to create a woodland economy that creates a financial incentive to manage woodlands. The thermal modification project is a key part of this plan.” 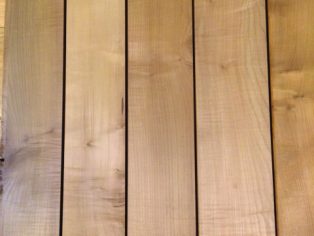 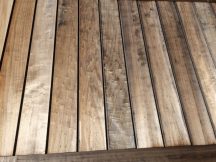