The much-anticipated launch of Hayfield Avenue is taking place on Saturday 31st October. The luxurious development is located in the Cambridgeshire village of Great Gransden and will offer families the opportunity to live in a tranquil, rural village that is commutable to central London.

Accessed off Sand Road, the development comprises 40 charming new residences, influenced by the Arts and Crafts era. Great Gransden benefits from a quintessential village community and has been a previous winner of the Campaign for the Protection of Rural England’s Best Kept Village competition. It is highly sought-after due to its Outstanding schooling, local amenities, peaceful yet convenient location, collection of historic buildings and the Gransden & District Agricultural Society Annual Show. The recently renovated 17th Century Great Gransden Windmill is the oldest remaining post mill in England and is a scheduled monument.

The off-plan launch will take place from a dedicated Sales Lounge that has been created at multi award-winning housebuilder Hayfield’s development in Silsoe, Bedfordshire. A large to scale model of the new scheme will enable interested parties to take a closer look at the site layout and various house designs. Prices for the first release of three and four-bedroom homes will range from £385,000 to £595,000.

Mark Booth, Managing Director of Hayfield said: “Our Hayfield Avenue scheme is in the beautiful and sought-after village of Great Gransden, which has seen very little new development in recent times. It is well served by the two nearby towns of Cambourne and St Neots, the latter of which happens to be the largest town in the Cambridgeshire and offers a 47-minute direct train service to London’s Kings Cross station.

“Hayfield Avenue will set a new standard for luxury homes in the area and the range of home designs will ensure there is something for first time buyers, growing families and downsizers alike. With this being an off-plan launch, we have priced the homes very competitively for a limited period. Although our construction site at Great Gransden is not currently open for public access, the outstanding specification features can be viewed within the Sales Lounge and show home at our Silsoe scheme.”

Construction work is progressing well at the 4.4-acre site, where a stunning linear route is being created through the development area, which has inspired its Hayfield Avenue name. Hayfield worked with Woods Hardwick Architects on the scheme, taking specific design cues from Arts and Crafts properties in the village. A total of nine house styles will feature across the development, giving a wide choice of two, three, four and five-bedroom homes. ‘Play Streets’ will be incorporated within the centre of the scheme, which will see the road surface designated as an area for cars and pedestrians to share.

Great Gransden is a convenient location for commuting into Cambridge, Bedford, Stevenage and Peterborough and across East Anglia. The close by A428 provides excellent access to the A11 and M11 Motorway, the A1 and the A1/M1 link road, as well as the A14 and A10. The village also benefits from a bus service, which stops at numerous locations including Cambourne, St Neots and Cambridge.

Earlier this year, Hayfield secured an esteemed five-star customer satisfaction rating from the Home Builders Federation (HBF). In 2019, the company made history by becoming the first ever to be crowned Best Small Housebuilder in both the WhatHouse? and Housebuilder Awards. Hayfield also won Best Customer Satisfaction Initiative at the 2019 Housebuilder Awards, with the judges selecting the newcomer above numerous established PLCs. The company has also scooped three NHBC Pride in the Job Awards. 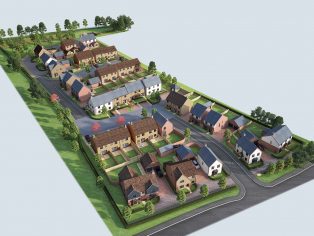