A brownfield development in Walsall, West Midlands, has become a highly sought after location after being fitted with Marley Eternit Cedral Weatherboard.

The ease and speed of installation meant that Cedral Weatherboard played its part in ensuring that the 73 new build homes for affordable rent on Barracks Lane were completed exactly on schedule.

Because Cedral Weatherboard results in a faster build programme and less time spent on site, it can bring sizable savings in labour costs. Completing Barracks Lane quickly meant that whg, the client, could see a quicker return on investment by offering the 73 properties for rent sooner.

Having used Cedral Weatherboard on a number of other developments, BM3, the project architects, initially specified the range as they were aware of its appealing aesthetics and low maintenance. Cedral Weatherboard has an installed life expectancy of at least 50 years.

As easy to work as timber but with the durability of cement based products, Cedral Weatherboard has good resistance to fire and is dimensionally stable. It is very easy to install and the boards can be mounted rigidly with no requirement for expansion joints.

The development at Barracks Lane was built by Leicestershire-based housing and construction group Galliford Try, which because of the simplicity of installation did not require any specialist sub-contracted trades on site to fit the material.

“We specified Cedral Weatherboard because we have used it many times before and have always been impressed with its physical properties as well as its ability to be installed quickly and easily. We expect to be specifying the material again in the near future.”

The ‘Blue Grey’ Cedral Weatherboard was fixed in a ‘ship-lap’ style to maintain a traditional aesthetic. The colour was chosen because of its contemporary yet subtle appearance, and the fact that it complimented the red brick and white painted walls used on other elements of the facade.

Cedral Weatherboard is available in a palette of 19 colours and three woodstain finishes. Alongside this, Marley Eternit offers an extended choice of colours in any factory approved BS colour.

Low maintenance fibre cement Cedral Weatherboard can be used for a wide range of other exterior applications where there are ongoing issues with timber. This includes soffits, fascia and barge boards, all of which are in vulnerably exposed elevations within the building envelope.

The development of 73 new build homes for affordable rent was commissioned by WHG in partnership with Galliford Try.

For further information on Cedral Weatherboard just ask ME at www.marleyeternit.co.uk/facades or call ME on 01283 722588. You can also follow ME on Twitter @MarleyEternit. If it matters to you it matters to us, that’s why with ME it’s all about you. 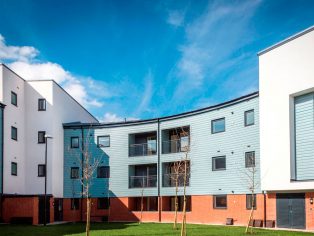