At Cowfold in West Sussex, developers Hellett & Holden took on the task of refurbishing a grade-two-listed Georgian house and stables, and constructing an adjacent new house. This rural location, in the heart of the Sussex Weald, called for a sensitive approach to design and specifications of materials.

For the driveway and parking areas, totaling 220m², the local authority demanded a high aesthetic standard. They specified a permeable surface be used, compliant with current SuDS regulations, so block paving was deemed unsuitable. Permeable pavers were briefly considered, but lacked the smart appearance needed for this upmarket project.

Resin-bound paving, with its permeability and good looks, was recognised as the solution Hellett & Holden were looking for. Understanding that installation of resin-bound systems is a specialist matter, the developers approached Clearstone to work on the finer details, and then to install the surface.

After careful groundworks and preparation, the Clearstone team were able to complete installation in a day. The driveway and parking areas were finished in Clearsone’s ‘Chesil’ colour. Goldstone Homes – a partner in the project – were impressed with Clearstone’s approach:

“The Clearstone guys were very cooperative and clearly knew what they were doing. They finished on time and left the site very clean and tidy”

“Estate agents and prospective buyers coming to view the property have been instantly impressed, often commenting on the stylish driveway”.

The finished result is one that everyone – developer, builder and Clearstone – is happy with. Sean affirms:

“The costs were slightly higher than for block paving, but it’s been well worth it to get the tasteful appearance we wanted to achieve”. 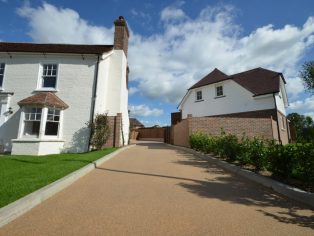