Concerted national effort is needed to boost number of women in Trades, according to new research.

New research by Mears Group suggests that a strategic national approach is needed to boost the numbers of women working in trade roles in the social housing sector. The research, which was carried out by the Construction Youth Trust on Mears’ behalf, was launched on Tuesday 9 th January at a special event hosted by the Rt. Hon. Baroness Smith of Basildon at the House of Lords.

Latest figures produced by the CITB in 2016 revealed that while women make up 13% of the construction workforce, when it comes to manual roles only 1% are female. With a serious skills shortage in the construction industry, and a need for greater gender diversity in a sector where a significant proportion of households are headed by women, there is a strong business case for encouraging women to work in manual trades.

So why is the industry failing so badly? Mears’ research, which was developed by their CITB-funded ‘Tradeswomen into Maintenance Project’, found that the challenge lies in the complexity of the issue. Causes are multiple and there is no single, quick-fix solution.

Project Manager, Gainor Keeton explains: “The findings suggest that the difficulty in attracting women to become part of Repairs and Maintenance teams reflects a wider social problem of gender stereotyping that starts in the family and extends throughout life.

“There is no one root cause of inequality; multiple causes are at play. These interact with each other to decrease the likelihood of women getting into training and jobs in the trades, let alone employment by social landlords or Repairs and Maintenance companies,” she said.

Tradeswomen who contributed to the research cited numerous barriers to women taking up roles like plumbing and construction – from hostile working environments to poorly fitting Personal Protection Equipment that just isn’t designed for women.

However, the research also highlights examples of good practice, including many successful and effective employment and training initiatives to recruit, train and employ women.

“Employers who are successful in recruiting and retaining women in the trades have, without exception, a strong gender equality ethos coming from the top, and take positive action to recruit and retain women,” said Keeton.

The report concludes that the lack of progress in increasing the proportion of women working in the trades is not due to a lack of will among stakeholders, nor to lack of examples of good practice in including women in trade training and employment, nor to the absence of a clear business case for employing women in Repairs and Maintenance teams.

Instead it finds that increasing the proportion of women working in social housing Repairs and Maintenance teams is simply not a national strategic priority. Gender and other diversity characteristics are not mentioned in the CITB’s forecast, for example, and in the Government commissioned Farmer Review of the UK Construction Model published in 2016, women are mentioned just once when citing Women into Construction are cited as an example of brokerage used by Crossrail to provide enhanced opportunities for jobseekers from disadvantaged or under-represented backgrounds.

The report makes a number of recommendations for tackling the problem. In order to provide leadership at a national level, it says, “a Gender in Housing Repairs and Maintenance Action Group should be established”.

On the back of the findings, Mears have also published a series of good practice guides which aim to support landlords and other businesses in the social housing sector to increase the number of women working in trades and a toolkit for schools to encourage more interest in manual roles among girls.

Jane Nelson, Mears’ Group Executive Director, who spearheaded this initiative and who started her career as an apprentice Painter and Decorator, said: “We are pleased to launch these important publications. We hope they provide social housing organisations and contractors with practical recommendations and examples of how the proportion of women working in the manual trades in the social housing building maintenance sector might be increased. It’s time for us all to make a concerted effort to do more in this area and help to generate a range of benefits to social housing landlords and the communities in which they work.”

Alison Inman, President of the Chartered Institute of Housing said: “It has been a joy to be part of the  teering group for this project. The number one concern for tenants, wherever they live, is repairs.

Maintenance matters and I think it’s time we spent more time talking about it. We’re facing a demographic time bomb where many of ‘men on the tools’ simply won’t be here in 10 years. So this isn’t about added value – it’s what we must do.

“At the minute we’re only fishing from half the pond and that’s bonkers! This project is trying to do something to change that.”

Rt. Hon. Baroness Smith of Basildon said: “I’m delighted to host this event marking the launch of this important research. It’s an important signal that the industry is ready to move on from just talking about it and do something positive to bring about change.”

“It is vital that we address the under representation of women in this industry. If less than 1% of the workforce are female, that means we’re losing out on the talent, the skills and the strengths of so many women with potential.”

Paul Roberts, Executive Director of Guinness Property who also spoke at the event, said: “Working with Mears and others, good progress has been made over the last year with the Women into Maintenance initiative and we now have more structure to our recruitment and development than ever so that we can really make an impact.

“This year Guinness is building on the success of the project and working on a number of approaches – apprenticeships, broadening access to work and work experience, engaging with more colleges and colleagues across the sector to increase support, provide more development opportunities and broaden advocacy across key areas such as diversity and skills shortage – so that 2018 can be a year for step change.” 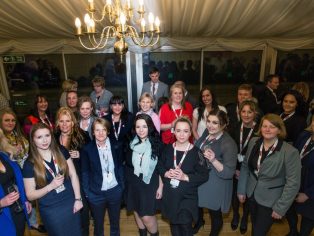