Consort Ltd is making a positive difference to the lives of disadvantaged people in and around its home town of Nottingham by reassigning money previously budgeted for corporate hospitality.

The fabricator, which has long manufactured PVC-U window systems from the UK’s leading supplier VEKA Group has supported charities such as Emmanuel House – a centre for homeless people – and Fists up for Frankie; a campaign that funds treatment for neuroblastoma (an aggressive form of childhood cancer).

“Changes in the law introduced in 2010 left many companies questioning what forms of expenditure would subsequently be considered ‘corporate hospitality’ and what would be seen as ‘bribery’. We chose to avoid any such confusion and instead donate our hospitality budget back into the community that has contributed so much to our success since the company was established in 1950.”

Every year, Consort allocates a sizeable donation to worthy causes. This money would previously have been earmarked for corporate gifts and entertainment. Jeff continues:

“Besides helping to support the most vulnerable and marginalised citizens in and around Nottingham, we are also raising the profile of organisations that rely purely on fundraising and donations to continue their work. Emmanuel House for example, is a recognised cause in the area with a visible presence through its charity shop, but nevertheless receives no statutory funding. Conversely, some of the charities we support do not have the profile that Emmanuel House enjoys, making fundraising even more of a challenge.

“As part of this year’s budget, we have donated £600 to Remedi; a charity that provides restorative services for people affected by conflict in various settings, throughout the midlands and the north. We always ensure though, that our donations make a positive difference for people in our area, so in this case, it has been used to support people in Derbyshire to cope and recover after being victims of crime.

“We have a loyal customer base who rely on Consort for quick and efficient service and industry leading systems from VEKA Group. Every Christmas, we send each of them a letter, thanking them for their continuing support and updating them on the charity donations we have made that year. We like to think that this gives them a ‘share’ in doing something worthwhile for the community, and we’ve received no complaints for redirecting our budget in this way. Many customers have actually done something similar. We look forward to working with more local charitable organisations in the years to come, and making a difference for people who need it the most.” 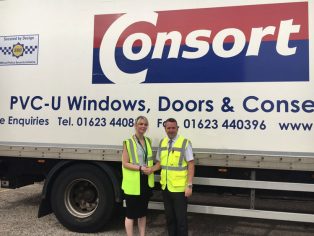