After a robust month for construction in October the same could not be repeated in November, as year on year contract value decreased by 30 per cent.

According to the December edition of the Economic & Construction Market Review from industry analysts Barbour ABI, total construction contract value in November reached £5.5 billion (see fig 1.1), reverting back to the same total in August that occurred in the aftermath of the Brexit vote. Major sectors such as residential, commercial & retail and infrastructure struggled to gain momentum on the month.

Despite a lacklustre November, the residential sector still led all sectors with £2.1 billion worth of construction contracts, with 79 per cent of the value coming from private housing investment. It was London and the North East that led all regions, each with 15 per cent of the contract value total. The North East’s rise in November was greatly helped with the commissioning of the Tees renewable energy plant in Cleveland, worth £650 million.

“The number of construction projects in November were at the lowest point since December 2015 but the total contract value remained stable in comparison to the rest of 2016, indicating that larger projects are still being commissioned, making up for the lack of overall contracts. When comparing October and November to last year’s figures, the industry is vastly behind where it was at that time, with anxiety over the Brexit and future political decisions the most likely probable cause for the drop off.”

“The industry is still relying heavily on the residential sector to bring in a large proportion of contract value, putting too much reliance on the sector to perform month after month. Other major sectors such as infrastructure and commercial & retail will need to see an increase in construction contracts and value if construction is to have a positive turnaround in 2017.” 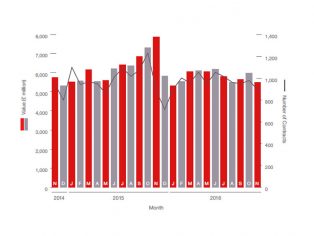