The value of new construction contracts in April reached £4.9 billion, a decrease of 6.8 per cent compared to March. The decline coincides with a housebuilding slump that saw a drop of 15.3% compared to the previous month and a wavering infrastructure sector that has performed poorly so far in 2018.

The latest edition of the Economic & Construction Market Review from industry analysts Barbour ABI highlights levels of construction contract values awarded across Great Britain. The top project for the month was the ‘M1 Junction 16- 13 Smart Motorway upgrade’ valued at £349 million, almost four times the value of the next biggest project (see figure 1.1).

Across the rest of the construction industry, medical and health construction posted the highest monthly value for projects for more than two years, at £229 million. Hotel, leisure and sport construction saw an increase in contract value for the third month in a row. Commercial and retail and education both saw declines in contract values, down 10 and 9.3 per cent respectively.

Regionally, London was the region with the largest share of contract awards value in April with 20.3% of the total, with three of the largest top ten projects across April. The capital was then followed by the East of England with 16% and the South East with 11.3%. 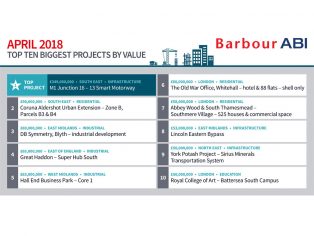