Counting down to the Future Homes Standard

What is the most cost-effective way for SME housebuilders to meet challenging carbon reduction targets set out in the Future Homes Standard? We asked Stuart Nicholson, roof systems director at Marley and Stuart Elmes, CEO of roof integrated solar manufacturer, Viridian Solar, which was recently acquired by Marley, for their views.

In January, the Government set out the draft regulations for the 2025 Future Homes Standard, which will require all new homes to be highly energy efficient, with low carbon heating, and be zero carbon ready by 2025. To ensure the industry is prepared for this, new homes will be expected to produce 31% lower carbon emissions from 2022, as part of changes to Part L of the Building Regulations.

This improvement in energy efficiency cannot be made by simple improvements to the building fabric and it will require either solar PV, with an efficient gas boiler, or a heat pump to achieve the required levels. This has led to some concerns that even the most sustainable SME housebuilders, in some parts of the UK, could struggle because sale values may not cover the additional costs. With just a one-year transitional period from when Part L is introduced in 2022, it also gives little time to make these improvements to building specifications.

So what’s the best way for SME housebuilders to achieve these targets in short timescales?

“Solar PV on the roof, combined with an efficient gas boiler, appears to be the easiest and most cost-effective way for housebuilders to meet the new Part L targets, partially because some of them will already have a supply chain and trusted installers in place. PV technology is tried and tested, readily available and has become much more affordable.”

“We commissioned modelling which suggested that gas plus PV resulted in significantly lower energy bills for residents than a heat pump alone. This is backed up by Government figures which show that annual bills for regulated energy in a gas plus PV solution would cost £168 per year, whereas a heat pump would cost the resident £369 per year.”

In Scotland, where they have had higher energy efficiency requirements since 2015, 80% of new builds have solar PV and Stuart Elmes expects there to be a similar approach in England:

“Most housebuilders in Scotland opted for solar PV plus a gas boiler as a favoured specification. Some tried heat pumps but experienced problems with customer acceptance. Many also reported that a combination of increased demand for installers and an underdeveloped supply chain, led to an increase in the costs of heat pump installation.”

So in the short term, solar PV and a gas boiler looks like a very efficient way for SME housebuilders to meet the interim Part L targets, but what will happen when the Future Homes Standard 2025 comes into force?

“The draft Future Homes Building Specification suggests electric heating, via a heat pump and high levels of fabric efficiency. However, this will need to go out for further consultation and we believe the Government will have to add solar PV. Heat pumps require electricity to run and solar PV can provide this for free, so it would be foolish to ignore it. By just installing a heat pump, the cost to run the heating and hot water is higher than for gas heating. With the increasing requirement to charge electric vehicles as well, on-site electricity generation is the way to keep running costs under control for buyers of new homes.”

“We believe the Government will need to reconsider including solar PV in the FSH to mitigate against high energy bills for buyers of new homes. I believe solar will become an established and standard part of all new homes. A move to electric heating and electric vehicles will massively increase demand for electricity and local generation will reduce the costs for consumers of such technologies.”

But what about the initial capital outlay for SME housebuilders? While the Government says that a heat pump package has a lower capital cost than gas boiler plus solar PV, Viridian Solar has found the costs assumed for solar PV were already out of date and will be further out of date by 2022.

“We estimate the cost of solar technology has dropped by around 80% over the last decade. What’s more, new integrated PV systems, like our Marley SolarTile, overcome challenges with aesthetics or planning because they simply replace a section of roof tiles or slates, acting as a seamless part of the roof design. They are quick and easy to install, without the need for specialist contractors and are available as part of our full pitched roof system, backed up by a 15-year warranty.”

For more information on Marley SolarTile®, or to view a demonstration installation video, please visit: www.marley.co.uk/solar 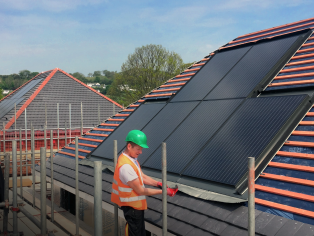 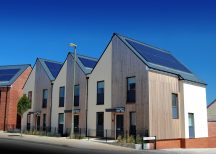