An Edinburgh housing development has received an excellent rating from the nationwide construction awards body.

Pennywell Living development – which is currently under construction by Urban Union who were appointed by the City of Edinburgh Council – received an overall score of 43 out of 50 by the Considerate Constructors Scheme.

The Considerate Constructor Scheme is a nationwide initiative set up to by the construction industry to improve and enhance relations with communities where construction is taking place.

The scheme encourages sites to adopt best practices beyond what is set out within statutory requirements and the main areas of concern are: general public, workforce and the environment.

“The entire team at the Pennywell Living development is delighted with this recognition from the Considerate Constructor Scheme.”

“Construction on the site only began in June 2014, and generally it takes time to work up to a score of 43, with 35 being an average score for new developments. This makes our score an incredible achievement and truly echoes the handwork and contribution made by the entire team.”

Pennywell Living is one of Scotland’s largest housing-led regeneration projects, which is set to provide 356 social and mid-market rent homes, along with 363 new properties for private sale.

The extensive development, which is being built by developers Urban Union, is a result of a major investment of £42 million by the City of Edinburgh Council and includes £7.9 million grant funding from the Scottish Government. 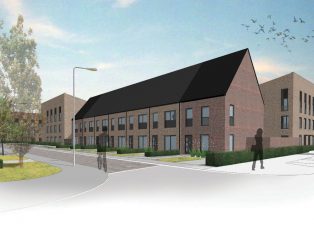