How house prices in Europe changed in the last four years

Four years can be a long time in sport, politics… and house prices.

When the last Euros took place in June 2012 Fabio Capello had not long resigned, Leicester City was in the Championship, the Lib Dems were in coalition, and few would have predicted that house prices in Turkey, Ireland and Sweden would be about to embark on a period of prolonged growth.

With more than 74% of those countries competing** recording price growth in the intervening four years.
The divergent performance of northern and southern Europe is evident.

The Nordic countries along with Ireland, England and Germany have seen prices accelerate while prices in most of the southern European economies still sit below their level in 2012.

The hosts, France, are favourites to win, here house prices are 6% below their 2012 level but they have reached their floor with growth of 0.5% recorded over the last 12 months. 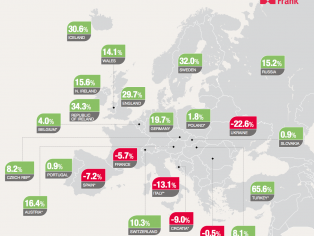