The diversity of nations is evident on construction sites countrywide, with Lovell’s Trinity Walk development in Woolwich being no exception.

One of south east London’s biggest regenerations schemes with over 1,500 homes being built over 13 years, it’s been dubbed the ‘League of Nations’ on site and for good reason. More than 15 countries are represented in the construction and subcontractor teams – from Italy to Ireland, China to Uganda, Romania to Russia; and closer to home, England and Scotland.

Over 100 construction workers and sub-contractors are involved on site at any one time and many are local, adding to the huge inward investment.

The Royal Borough of Greenwich appointed Lovell in July 2013 as its development partner for the £398 million Trinity Walk programme. Lovell was chosen because of its flexible and collaborative approach to the long-term partnership.

“This major regeneration scheme is replacing over 1000 deteriorating flats and will transform the area with over 1,500 new modern homes built over a 13-year programme.”

“There’s a lot of banter on site between the different nationalities. As you would expect this really comes out during major tournaments such as the football World Cup and European qualifiers. It’s all very friendly, light-hearted and creates a great working culture on site. There are some real characters.”

Lovell has a proud site safety record and one that’s taken very seriously, as Chris explains,

“Safety first is our watch word across all our sites and to achieve this we encourage a collaborative approach with the Lovell team and our sub-contractors which ensure everyone mixes well to reach the common objective of building of building our ptojects safely and on time. The work is demanding but at the same time, very rewarding.”

Chris’ team completed the official topping out of Phase 3 during the summer and part of the process was to host a VIP visit and lunch for dignitaries on the 10th floor. Chris explained,

“The topping out was a fantastic event and was a chance to thank everyone involved on the project and show off the buildings completed to date.”

Trinity Walk is offering buyers good sized one, two and three-bedroom apartments and as well as three and four bedroom townhouses. The first phase sold out in June. Each new home has been built to maximise space and light as well as being finished with a high specification to ensure high levels of comfort, security and quality.

“Trinity Walk is offering buyers good sized one, two and three-bedroom apartments on phase 2. The first phase sold out in May and all homes are now legally completed. Each new home has been built to maximise space, light and storage as well as being finished with a high specification to ensure high levels of comfort, security and quality.”

“We have sold many of the apartments to first time buyers who realise they can afford to buy in London in an up and coming area. Another six buyers are due to move into a new phase in the coming weeks.

“With prices for a one bed luxury apartment starting at £349,950, first-time buyers are finding they can afford to buy at this brand-new development in Woolwich with the Government’s Help to Buy initiative. A 5 per cent deposit is all buyers need and with the interest rates being historically low, there’s never been a better to get onto the property ladder.” 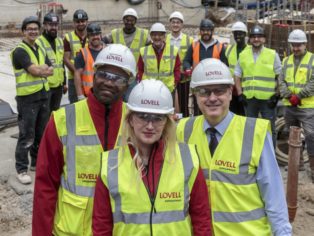