From parking to penthouses: £1.3 billion of prime residential land locked up in London car parks

Figures from the latest Pastor Real Estate report reveal that converting a car park into a high-quality residential development could add up to 300% to the land value. Analysing a number of large multi-storey car parks across Mayfair and Marylebone the report reveals that 18 operational sites providing over 4,500 spaces currently conceal over £1.3 billion of prime development land.

Demand for property in prime central London continues to grow, whilst large-scale development sites are decreasing. This has led developers to turn to car parks in two of the highest performing districts that offer an increasingly rare prime opportunity, with strong potential returns.

Property values in Mayfair have increased by 69% in the last five years, making it one of London’s highest performing areas as residential prices average £2,400 per sq. ft. The highest transaction recorded in Mayfair in 2015 reached £5,000 per sq. ft.

Achieving similar levels, values in Marylebone have increased by 54% over the last five years. Typically residential prices average £1,500 per sq. ft., however, largely due to a number of new luxury developments and high-profile restaurants, the highest transaction currently recorded in 2015 achieved £3,000 per sq. ft.

Taking these figures into account the report calculates that the car park with the highest potential residential value is on Portman Square, Marylebone. Currently providing a value of £133.5 million (assuming an annual income at 4% yield), located on one of Marylebone’s finest garden squares the total residential value could reach £496.2 million (assuming £3,500 per sq. ft.).

Sandwiched between two of London’s busiest roads, Marylebone Road and Oxford Street, Marylebone has a high concentration of public car parks located within its streets. The multi-storey car parks on Welbeck Street and Bryanston Street could provide a lucrative option for residential developers.

The 298 space car park on Bryanston Street currently provides an annual income of £90.6 million, however, if redeveloped into a residential scheme the value of the site could reach £336 million. Similarly, the car park on Welbeck Street provides an annual return of £109.5 million for its 360 spaces, whist a residential scheme located on the prime Marylebone site has the potential to be worth £406 million.

Located in a prime Mayfair location, the multi-storey car park on Audley Square has been the subject of numerous residential planning applications in recent years. The latest plans submitted would see the large site converted into a super prime development, with a reported projected value of up to £2 billion. If approved the scheme could comprise five townhouses, three mews houses, 21 apartments, as well as a luxury penthouse and collection of opulent penthouses.

“London is evolving and the urban population is getting younger and their dependency on cars is decreasing as transport connections continue to improve. This has seen the need for parking in central London decline, whilst the new housing will be a pressing concern in the capital for the foreseeable future.”

Young people taking up residence in London for employment, education and leisure are increasingly less likely to own a car, with the number of 17-20 year olds in the city holding a full driving licence falling by 16% since 2009. Focusing on Mayfair, as the population of the area gets younger, currently 64% of residents do not own a car, compared to 42% across London as a whole.

The steady decline of car ownership in the capital city has been actively promoted by the Mayor’s Office as congestion charging, pre-dominance of bus lanes, provision for cycling and investment in rail and underground services are all intended to reduce the need for car usage across the city.

One major success story of a parking to residential scheme is The Chilterns, Chiltern Street, Marylebone. Receiving planning permission in August 2011, the residential scheme, set to complete at the end of 2015, provides 60 luxury apartments, with a wealth of amenities including wine cellar, private cinema and gym. Proving popular, to date most of the units have been sold, with only a few of the penthouses remaining.

David added: “As the demand for prime London property continues to out-strip supply, identifying development opportunities that add value to the neighbourhood, provide high-quality residences and essentially prove commercially viable will become a pressing concern for central London developers. Throughout the report we have identified a number of strategic car park sites that could now be more viable and better suited as a residential or mixed-use development.” 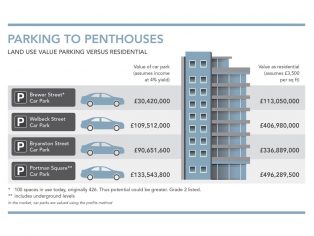