Leading UK garage door manufacturer, Garador, recently provided three of their lorries to help deliver over 500 bikes to their riders so they could take part in the Coast to Coast charity bike ride. Garador normally uses the lorry fleet to deliver a range of garage doors.

“Ensuring all the cyclists and their bikes were at the right place at the right time was vital. We were more than willing to give a hand and our modern fleet of well kitted out trucks was easily adapted so all the bikes could be transported safely.”

‘They were amazed by the support of the communities on the route and the numbers who turned out to support the riders’.

Visit www.garador.co.uk to find out more. 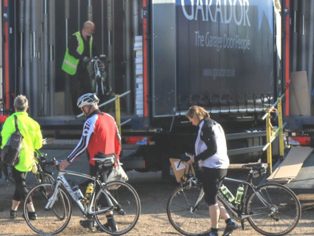