The upturn in construction activity has created a welcome increase in demand for bricks and blocks. This is great news for the construction industry but means materials manufacturers are having to react quickly. Stephen Harrison, managing director of Hanson Building Products, looks at how manufacturers are gearing up to increase output.

Construction activity returned to growth last year after five years of flat or falling demand. The upturn is being driven principally by a surge in private sector housebuilding, which is set to continue with the Chancellor’s announcement that the Help to Buy scheme for new-build homes is being extended until 2020.

That’s good news but it has inevitably put pressure on the supply chain. Cutbacks in production capacity during the recession meant the brick industry was caught by surprise when the recovery suddenly kicked in last year. In the first quarter of 2013 the UK brick market was 30 million below the same period in 2012 while in the second quarter, sales were up by almost 70 million on the previous year – and that upward trend has continued.

No problem, you might think. Stocks must be high after five years of falling demand. But the truth is that manufacturers have dramatically reduced their inventory levels in the face of a weak market, static selling prices and significant cost inflation.

Now that manufacturers have a clearer picture of future demand – and are confident it will be sustained – they can start investing in their plants and ramping up production.

Housing starts in Britain last year rose by 23 per cent. Further growth of 16 per cent is forecast this year and 10 per cent in 2015. But let’s keep this in perspective. The 2013 brick market was around 900 million bricks smaller than in 2007, and there is currently around 30 per cent spare production capacity in the industry.

Aircrete block supply presents a different challenge. The production units make a narrower and more consistent range of products than brick plants so they hold much lower stocks. The rapid market uplift caused a big destock but, unlike bricks, there were no alternative products in the yards, so the supply squeeze became more acute. However, manufacturers are stepping up production and are beginning to ease the logjam by ensuring their customers plan ahead and do not over-order or stockpile blocks. It is estimated that there is sufficient production capacity in the UK to allow the aircrete market to grow by more than 30 per cent from its 2013 position.

What is worth remembering, is that the current supply bottleneck is a short-term problem caused by historically low stock levels and there is more than enough brick and block manufacturing capa-city in the UK to cope with market expansion.

One thing is clear – bricks and blocks are not about to be overtaken by modern technology and will remain critical to sustainable construction.

The government has set ambitious sustain-ability targets for new homes and although there is some debate about what will and won’t become mandatory, there is general consensus that adopting a fabric first approach to housebuilding will help meet the required levels.

Fabric first promotes traditional building materials, good building practice and reliance on thermal mass, insulation and reduction of air leakage to cut energy use. Heavy building products help deliver thermal mass, energy efficiency and sustainability. Aircrete blocks, for example, have inherent thermal insulation properties and can be used in internal and external walls, foundations and beam and block floors. They help meet lower U-value targets and improve the linear thermal bridging performance that occurs at junctions, which is a key area of heat loss where the continuity of the insulation is interrupted. 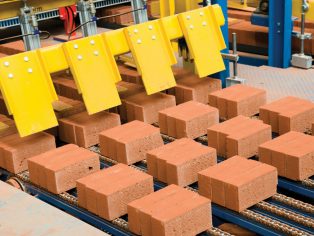