A plan to regenerate Swiss Cottage town centre has been given the go-ahead by the Secretary of State for Communities and Local Government.

Essential Living, a developer and operator of homes for rent, will deliver and manage the mixed-use scheme under a single brand. As well as an array of communal facilities and amenity spaces, the plans will include 54 new affordable homes and purpose-built space for community use.

Camden councillors refused the proposals for 184 flats in September 2014, despite a recommendation by the council’s planning officers that the scheme should be approved.

The scheme, designed by GRID architects, also received backing from the Design Council and the Mayor of London.

“This has been a lengthy process but we are very pleased the Secretary of State has backed the independent planning inspector’s recommendation that this important proposal for the regeneration of Swiss Cottage should proceed.

“The extensive scrutiny of the scheme during the public inquiry has revealed the significant social benefits of the scheme in terms of new homes for rent and community space, enhancements to the street level frontages and the recognised attractive quality of the design.

“This is the right decision for the revitalisation of Swiss Cottage and we will now commence the work to deliver our proposals which we will be calling Theatre Square.”

Last week, the Department for Communities and Local Government (DCLG) supported the recommendation of an independent planning inspector that the council’s refusal should be overturned, noting the significant social benefits the development would bring.

The tower will be joined with a part five-storey, part seven-storey lower podium block hosting 54 affordable homes, as well as flexible retail space to animate street level and a new community centre. 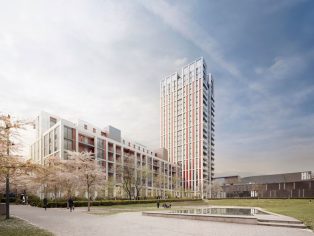 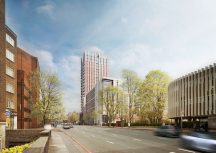 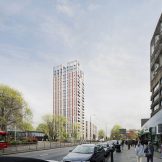