Leading UK housebuilder Redrow has taken on a record number of university graduates in 2015 including two at its new Kent office.

The company recently reported another set of record annual results and, to help meet high demand for its homes, is investing heavily in the next generation of workers.

Redrow has welcomed 31 university leavers this year as the company celebrates the fourth anniversary of its rotational graduate scheme. Re-launched in 2011, the popular programme grants successful applicants the chance to work across a number of departments – including its land acquisition, planning, commercial, sales and construction operations.

Noah, 23, from North London, graduated from the University of Sheffield with a 2:1 in urban studies and town planning.

“I worked in an estate agent’s after graduating and decided I wanted to work in a similar field. I’m keen to work in the land department, but it’s good to learn about the rest of the business during the rotation. Everyone’s really friendly and I don’t feel like I’m annoying them asking lots of questions. It’s great that there are opportunities to progress if you work hard.”

Sean graduated from the University of Portsmouth with a first in architecture.

The 22-year-old from Brentwood said:

“I wanted to move away from the creative side to focus on the bigger picture by working in the technical department and out on site.

“The training scheme has a structure with a focus on development. I’m learning a lot in short amount of time and there’s the possibility of quick progression.”

Last year Redrow also launched a new programme for those interested in HR, finance and IT roles.

A proven springboard for a long-term career in the housing industry, Redrow’s various graduate schemes have seen the company take on 71 graduate trainees over the last five years. Testament to its success, 32 of the 40 graduates that joined in previous years are still working within the business, having achieved promotions upon completion of the programme.

Annually Redrow builds more than 4,000 new homes across England and Wales, with an emphasis on traditional family housing.

The developer directly employs around 1,800 people and provides employment for thousands of sub-contractors on its housing sites. 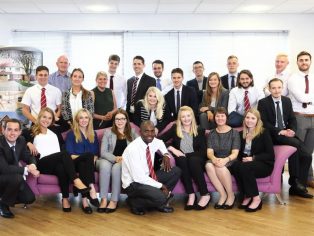