A new homes venture in Cambridgeshire featuring Arts & Crafts inspired architecture will honour a designer from the era.

Award-winning Redrow Homes (South Midlands) plans the phased development of land in the village of Hauxton. The Northampton-based homebuilder has reserved matters consent for the first tranche of homes as part of the wider Hauxton Meadows scheme.

The first phase, known as Sanderson Manor, will be released for sale ‘off plan’ on April 10, with Cobden Gardens set to follow in late summer.

The names of the phases are a nod to T J Cobden-Sanderson, a designer from the Arts & Crafts era who studied law at Trinity College, Cambridge.

“As Hauxton Meadows will feature designs from our Heritage Collection of traditional looking Arts & Crafts influenced homes, we felt it was a fitting to pay tribute to T J Cobden-Sanderson by naming the first two phases of the development in his honour.”

Sanderson Manor will offer 37 homes in a choice of three, four and five-bedroom designs. Cobden Gardens will feature 61 properties with a range of two to five-bedroom homes.

Around 350 people have registered their interest in the homes and they will be invited to an exclusive preview event.

Redrow will also have a presence at the Cambridge Property Exhibition at the Corn Exchange on April 16.

“The volume of enquiries we’ve received from people interested in buying at Hauxton Meadows is evidence that there’s a demand for new homes in this part of Cambridgeshire.”

“People are really excited about the prospect of owning a home that enjoys the charm and character of a ‘period’ property, but with the style, convenience and practicality of being brand new with well equipped kitchens and sleek bathrooms and en-suites.”

Those who choose to make Hauxton Meadows their home will be able to embrace village living, while also benefiting from excellent commuter connections to Cambridge and beyond. Junction 11 of the M11 is just over a mile away from the development, or for those who want to let the train take the strain, Foxton Station is only three miles away with journey times of around an hour to London Kings Cross.

The homes at Sanderson Manor will be available to buy ‘off plan’ via a Redrow sales consultant based at Bidwells on Trumpington Road, Cambridge from April 10. 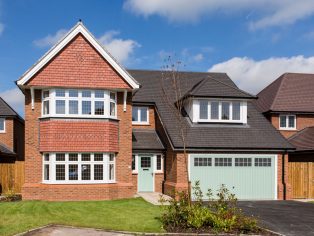