Carrie Burton, marketing manager of National Plastics, reviews how the 2014 Budget announcements will have an affect on the housebuilding industry and the impact on rainwater goods manufacturers, installers and suppliers.

There has been an undeniable buzz surrounding new build and developer projects over recent months, and ever since the Chancellor announced the budget the focus on new build projects has been even more prevalent.

In creating the Builders’ Finance Fund, George Osborne has effectively committed to restarting the many smaller projects that were left floundering when the recession began claiming victims a few years ago. By extending and revising the existing Help to Buy scheme into Help to Build, it seems Mr Osborne has now recognised that there was still a gap in terms of the ability of housebuilders to finance new builds with the confidence that there was an available purchase market.

The Right to Build scheme he plans to introduce looks likely to fill that gap by providing not only a platform for housebuilders to start new build projects, build on council land and restart stalled projects, but also by providing a £150 billion revolving infrastructure fund. There finally seems to be some assistance for existing urban areas where the Twilight Zone has essentially become the Dead Zone.

But what will all this mean for the market as a whole? From my point of view, speaking not as a builder, nor a manufacturer, but as a representative of an intermediary – a distributor – the main factor is surely confidence? In boldly offering to support not just new build schemes, but also floundering SME builds and degenerating urbanised landscapes, the government is saying very clearly that they believe the UK is ready to build its way into a new future.

By creating schemes of this kind, perhaps the Chancellor is seeking, once and for all, to send a strong message to the industry that we are ready to support not just the buyer, nor the big project contractors, but also the smaller enterprises, so as to promote a sustainable form of growth.

The fact is, rainwater goods aren’t just for new builds. They aren’t just for large-scale projects. The rainwater goods industry has survived due to its innate ability to adapt. The refurbishment and renewal markets, extension, self-build and renovation sectors, and even the Green Deal-esque rainwater harvesting schemes, have all had a positive impact not just on the sale of rainwater goods but in cementing their place in the construction market as a whole.

Of course we have seen all too clearly over recent months that we live in a country where the efficacy of domestic and commercial rainwater goods is so often and so toughly tested. There’s no question that the recent and devastating floods have brought with them a renewed interest in and requirement for quality rainwater related products, from drainage to underground waste systems, guttering to roofing protection systems. There has been a real focus on this group of products across all build sectors and demographics, and rightly so. Indeed, from my own experience, it has been roofline products that have seen, despite the economic climate, the most sustained and strong growth year on year.

We have seen a focus on protection systems following the heavy snow, and floods. We’ve seen new coloured products enter the marketplace. And we’ve seen a renewed resurgence of specialisation in roofline and rainwater product installation.

So maybe the tide is turning. Certainly, a few years ago I know you could ask pretty much anyone to tell you quickly what colour their gutters are and most people either wouldn’t know or would get it wrong. The mere fact that people generally had no idea what colour their own gutters were was usually a source of amusement. I wonder if the same is still true today? With so much more choice on the market, from colours, to cast iron, to woodgrain effect, and with the spotlight now on drainage, water dispersal and rainwater management, the rainwater goods market is going from strength to strength. It’s gained a focus and a renewed sense of place as part of the build process. Let’s hope the industry as a whole follows suit. 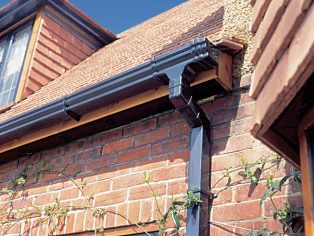