Homeowner steps up with Cedral Weatherboard

A property owner in Bognor Regis has successfully transformed the appearance of his home with the help of Marley Eternit’s Cedral Weatherboard.

Being as quick and easy to install as timber meant that the owner, with the help of his joiner son, was able to install the Cedral Weatherboard cladding in just a weekend, minimising labour costs in the process.

“I chose Cedral Weatherboard as it is a substantial material and looked extremely good in comparison to plastic-based boarding”, said Mr Fish, the homeowner. “My son and I attended a ‘Cedral Weatherboard Training Road Show’ organised by Marley Eternit at Covers of Chichester and this proved to be very useful when we came to fitting the product.”

Previously Mr Fish was tasked with regularly repainting his rendered exterior walls, however the low maintenance benefits of Cedral Weatherboard mean the he can now spend his time enjoying his weekends rather than climbing ladders with a paint tin.

After looking at a number of options to overcome the issue of regular high maintenance, the owner selected Cedral Weatherboard because, apart from it being hassle free, its subtly textured surface echo the aesthetic characteristic of timber.

The Cedral Weatherboard was fixed on all facades of the property in a ‘ship lap’ style above a height of 2 metres. Mr Fish added: “Now any painting of the rendered facade is at the lower levels and can now be done safely off household steps!”

Homeowners who upgrade the exterior of their property with Cedral Weatherboard can choose from a palette of 19 colours and three woodstain finishes. Alongside this, Marley Eternit offers an extended choice of colours in any factory approved BS colour.

Mr Fish and his family selected Blue Grey Cedral Weatherboard because of its contemporary yet subtle appearance and the fact it complimented other external colours used on the property. The owners have already received a number of positive comments from neighbours.

Being made from fibre cement means Cedral Weatherboard is durable and low maintenance as well as having good resistance to fire. It is dimensionally stable and has an installed life expectancy of at least 50 years.

“We are delighted with the look of our home and the fact that we no longer have to clamber up and down ladders to repaint the exterior walls,” said Derek Fish, the owner. “The Cedral Weatherboard has dramatically improved the appearance of our home and it was well worth the time and effort spent on the project.”

The existing painted cement render finish was creating a considerable maintenance burden for the owner because of frequent discolouration caused by rainwater run-off, wind-blown dirt and mould growth. In additional, the cement substrate required regular remedial work where it had cracked around vulnerable areas such as roofline.

For further information on Cedral Weatherboard just ask ME at www.marleyeternit.co.uk/facades or call ME on 01283 722588. You can also follow ME on Twitter @MarleyEternit. If it matters to you it matters to us, that’s why with ME it’s all about you. 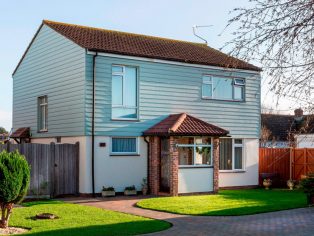