With just over 7 per cent of UK housing providing the basic features required for the elderly or people with a disability, the country’s accessible housing deficit is heading towards a crisis point.

Statistics show that one in five disabled people are living in homes which require adaptation to meet their needs, and research carried out by national charity Aspire indicates that the number of wheelchair accessible homes being built is on the decline, with over 20,000 wheelchair users still waiting for suitable, affordable housing.

House builders are being called upon to consider the needs of the elderly and disabled when planning a new scheme, and to design their properties in a way which allows for future renovations and refurbishments.

One SME house builder that has taken valuable steps towards combatting this growing issue is Yorkshire-based firm SB Homes. By partnering with accessibility solutions provider, Cibes Lift UK, the developer has been able to adapt homes for people of all ages and physical abilities.

The firm’s latest development, in Huddersfield, West Yorkshire, has been carefully planned to cater for people with further needs.

Taking the location of the development into account, in the village of Slaithwaite in the Colne Valley, SB Homes understood that the area was lacking accessible accommodation close to the village centre.

With a predominately ageing population, elderly homeowners who have lived in the village all their lives felt trapped in a situation where they were forced to leave the village or stay in homes that were too big and required continuous maintenance.

One of the main steps SB Homes took to ensure the safety and accessibility of the apartments, was to install four lifts — two in each of the buildings.

Gary Sullivan, marketing and sales director at Cibes, said: “A staggering amount of councils in England don’t have plans to address the lack of accessible housing, and with over 300,000 disabled adults in the UK with unmet housing needs, it is becoming more and more important for construction firms to take on this responsibility and prioritise accessibility.

“When many housing developers think of domestic lifts they tend to picture a bulky, obstructive eye sore that will take up a lot of space, ruin the aesthetic of the property, and put off potential buyers. This is the not the case at all, in fact it’s quite the opposite. Domestic lifts are often considered a selling point by potential buyers as it means the properties can be a ‘forever home’, a place where those with mobility issues can live comfortably and independently.

“Accessible homes aren’t just beneficial for people with disabilities and mobility issues, they improve independent living for older people, as well as families with young children. Even for those who aren’t personally affected by inaccessibility right now, the accessible housing deficit will have an effect as many will require an accessible property later in life.

“Therefore, it is equally important that the properties are designed to accommodate the changing needs of the buyers over time, so that the floorplans, amenities and services of the homes can be easily, and cost effectively adapted through property renovation.

“It’s clear that there is a crisis on the horizon and therefore the industry needs to accommodate for the long-term housing needs of the population. Instead of continuing to produce inaccessible properties to sort the short-term needs for more housing, it’s vitally important that the supply of accessible, easily adaptable homes is increased.”

Having worked with Cibes in the past, the firm was the first port of call for SB Homes, who have installed lifts into four of its developments, located across West Yorkshire.

Stephen Byram, Managing Director of SB Homes, said: “Accessible housing is a huge issue for the industry right now. Many people who have requirements for additional support are struggling to live their day-to- day lives because their own homes are simply not geared to help them and are totally unsuitable for their needs.

“Building properties that are specifically planned to support people in this situation not only helps those individuals, but also eases the pressures of the housing shortage — particularly for people who are trying to live independently and take their first or second step on the property ladder.

“However, providing accessible homes is something that’s usually overlooked by developers, due to the associated costs. When we looked in to the local demand and our target audience, we knew we needed to make it a priority. It’s helped us market the properties to people who wouldn’t have even considered moving there without them. Often, accessibility is the first thing that potential customers ask us about.

“So rather than viewing the installation of a lift as an extra cost, it’s actually a worthwhile investment that can be considered a huge selling point for a property. Throughout the past ten years in particular, lifts have become something that we’ve designed into a development right from the beginning.

“It’s not only those with a physical impairment or the elderly who the lifts appeal to. For example, it’s difficult if you live in an apartment building and have heavy goods to carry up the stairs.

“Being an SME house building firm it’s important that we understand the needs of the people in the area and are fine-tuned into what’s required to make the properties as safe and comfortable for potential owners as possible.

“Offering accessible housing, in an area that is crying out for it, is a great way for us to support local people and is part of us giving back to the areas in which we develop.” 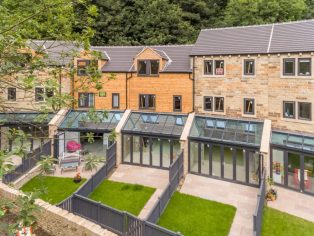