Households perceive that the value of their home rose in August, although at the slowest rate in five months, according to the House Price Sentiment Index (HPSI) from Knight Frank and Markit Economics.

Some 28.9% of the 1,500 households surveyed across the UK said that the value of their home had risen over the last month, while 5.3% reported a fall.

Households in all 11 regions covered by the index reported that prices rose in August, with those living in London perceiving that the value of their home had risen at the strongest rate (71.4), followed by households in the South East (68.4) and the East of England (63.5).

Since the inception of the HPSI, the index has been a clear lead indicator for house price trends. Figure 2 shows that the index moves ahead of mainstream house price indices, confirming the advantage of an opinion‐based survey which provides a current view on household sentiment, rather than historic evidence from transactions or mortgage market evidence.

The future HPSI (figure 1), which measures what households think will happen to the value of their property over the next year, crept up in August to 72.8, up from July’s reading of 71.7.

While this suggests that households are expecting slightly bigger price rises than in July, the future HPSI remains well below its peak of 75.1 achieved in May.

Households in every region expect the value of their home to rise, with those in the South East most confident about price increases (79.3). This is the third consecutive month that those in the South East have reported large price expectations than Londoners. The index also rose to a record- high in the West Midlands (74.3), signifying that households here are more confident that the value of their home will rise in the next 12 months than anytime since the index started in early 2009.

“A third consecutive monthly decline in the house price sentiment index suggests that the price exuberance seen in some corners of the market is easing. This comes amid increasing discussion about interest rate rises, which are likely to materialise within the next 6 to 9 months. Recent changes to the rules surrounding mortgage lending are also likely having an impact on market sentiment.”

“Yet the index also highlights the regionalised nature of the housing market. While the HPSI reading for London, where average house prices have seen the biggest increase in the last year, showed a slight increase in August, this was far overshadowed by the rise seen in the North East and North West of England. These regions are starting to experience some level of sustained house price growth amid growing buyer confidence.”

“UK house price sentiment remains strong overall, although it has cooled in each month since hitting a post-crisis peak in May. Not only does the sweet spot appear to have passed for house price sentiment, but the current period of decline is now the longest seen for almost four years.”

“Moreover, tighter mortgage conditions and the prospect of interest rate rises have acted to rein in households’ expectations of higher property values over the year ahead.” 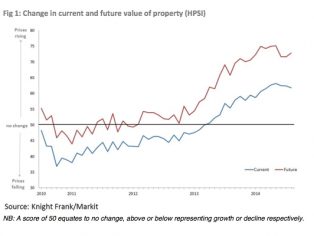 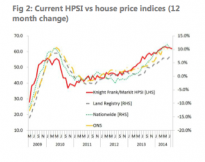 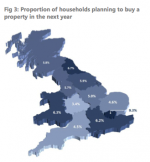