Changes to infrastructure, regeneration and affordability are three key themes which can drive the growth of local housing markets.

The latest research from property consultancy Knight Frank examines the opportunities in three bourgeoning areas of London linked by these factors.
Lewisham, West Ham and Tottenham Hale are all poised to benefit from large-scale new homes delivery and wider area regeneration, including investment into new major infrastructure projects backed by the Mayor of London, Sadiq Khan.

Despite the UK’s vote to leave the European Union and the documented slowdown in the London land and property markets, a combination of existing price point, development pipeline and planned infrastructure improvements will underpin these opportunity areas in the medium to long term.

The proposed Crossrail 2 line, Bakerloo extension and £344 million expansion to London City Airport are set to drive development and place making across this part of the Capital. Khan’s recent announcement that the Silvertown tunnel, DLR extension and a new cycle bridge between Rotherhithe and Canary Wharf will be built is further progress in helping to unlock this part of east London.

“East London remains buoyant, yet the positive sentiment is struggling to be heard over the slowdown in prime central London. Infrastructure improvements continue to add value, with recent Mayoral announcements concerning additional connectivity to the east, welcomed by all parties. Journey times to central London remain the most influential factor on house prices and as east continues to ‘move west’ we expect to see growth continuing to outperform in these key hubs.”

The report highlights that east London remains a focal point for growth and opportunity; house prices in West Ham are currently among the lowest of any Zone 1 or 2 locations along the Jubilee line, there are 10,000 new homes with full planning permission in Lewisham and residential prices in and around Tottenham Hale have risen by 32% over the two years to July 2016.

These factors, combined with local authority, GLA and TfL support and masterplanning will see thousands of new homes and jobs created as well as provisions made for small local businesses. 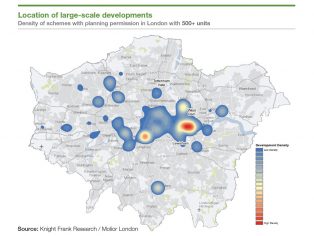