The re-developed Civic Centre and Library in Bromsgrove includes a landscape project for courtyards, access, parking and other areas around the building complex. Here, a fully infiltrating SuDS scheme uses concrete block and flag permeable paving alongside grass and planted areas, optimised by orifice flow controls, to manage rainfall on the site. All rainwater storage is at the surface within landscape features or underground within a voided stone sub-base below the paving.

A similar approach is taken at the new Bewdley School and Sixth Form Centre with infiltrating permeable paving. But, in addition, surface water runoff from roofs and other areas is slowed by collection and conveyance in a series of precast concrete channels and rills also used for education and play, then stored in open basins, a pond and storage swales before controlled release to the neighbouring stream.

The Australia Road urban renewal project in White City, London introduces the innovative concept of concrete block permeable paving as a thin overlay to existing streets. The permeable paving overlay simply replaces a tarmac road surface, over the original road base. The same concrete blocks, with a 2-6mm grit bedding layer and jointing material, as used in permeable pavements generally are here installed over a geo-composite conveyance sheet. This transports water horizontally, on an impermeable membrane covering the road base.

Water is removed without gulleys, attenuated and treated within the paving, then released horizontally via stainless steel slots into raingardens. Finally, orifice flow control chambers manage discharge to the combined sewer. Thus, rainfall remains within the SuDS landscape until storms have passed and the sewer can deal with water again.

The new case study covering all three projects is freely available to download via www.paving.org.uk where you can also request regular e:Bulletin updates from Interpave. 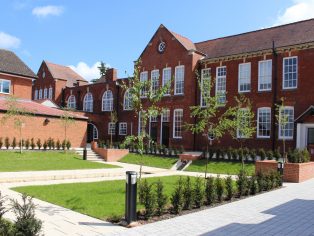 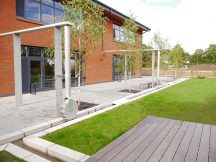