Topping the Barbour ABI Top 50 contractor league table for July 2019 is ISG with nine contracts awarded valued at a total of £425 million. In second place is Wates Construction, moving up eight places with seven contract awards at a total value of £383 million. In third place sits Telford Homes Plc with a single project – The Nine Elms Parkside residential development in Wandsworth valued at £276 million.

The contactor with the highest number of projects was Kier for a second month running. In recent months, we have seen Kier slip from its top spot to lower positions down the table, and in July they were awarded 22 projects at a combined value of £136 million. This continues the recent trend we are seeing from Kier, in that the number of projects awarded hasn’t reduced, but the combined project values have decreased substantially. Kier still hold the top position in the rolling 12-month period with a total of 151 projects at a total value of £1.74 billion. However, they are closely followed by ISG, with 60 projects valued at £1.45 billion.

‘This month we see the top contractor’s activity dominated by residential and commercial & retail projects. The highest value project for ISG was the London Waterloo Station retail and leisure development with a value of £200 million, and Wates Construction were awarded a £300 million project – Borough Yards commercial and office development in Southwark, London.” 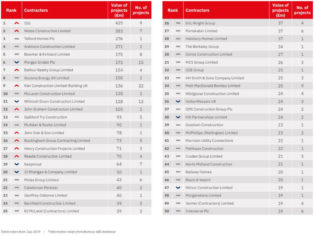