The completion of the £24 million housing development of 201 homes by New Gorbals Housing Association (NGHA) marks the first milestone in the regeneration of Laurieston – one of eight Glasgow City Council’s priority Transformational Regeneration Areas (TRAs).

Delivering a wide range of new homes, much needed community facilities, and creating many new jobs, the £100 million planned revitalisation of the area is delivering a major boost for the city.

One new resident receiving her keys today from the Deputy First Minister is Annie O’Donnell. At 76, Annie is the longest standing resident of Norfolk Court – the last remaining tower block in the area – having moved there in April 1976. She will be joined in the new Laurieston community by over 100 of her neighbours over the coming months.

Also starting a new life in the development are David Wilson and Aimee MacLeod with their daughter Eva, aged 7, one of the youngest residents. The family will move in to a flat which has been specially adapted for Mr Wilson, who is a wheelchair user.

Welcoming the completion of this stage of the project, Ms Sturgeon said:

“Regenerating Scotland’s most disadvantaged communities is a key priority for the Scottish Government. This new housing development in Laurieston is fantastic and a major step in the right direction. It really shows just how effective partnership working can be in regenerating our communities. It is only by working together that we can deliver change on a scale like this.

“Completion of the Laurieston development is a key milestone in the regeneration of Glasgow’s Transformational Regeneration Areas (TRAs) and a significant achievement for New Gorbals Housing Association.

Laurieston was the most densely populated and urban area of the Gorbals and has a rich, fascinating history. This regeneration project has been an active consideration by the council and NGHA for nearly 20 years.

The Council led and funded an award-winning master-planning exercise in the mid-2000s, which was developed in partnership with NGHA. This later led to the project being selected as one of three initial pilot TRAs to be supported by Transforming Communities: Glasgow – a regeneration partnership promoted by Glasgow City Council.

“I am delighted to see this first phase in the transformation of Laurieston reach completion.

“The exemplary design procured by NGHA will set the tone for what is sure to become one of the city centre’s most desirable urban neighbourhoods, providing high quality homes across a range of affordability levels.

“Partnership working in its truest sense has been key to the success of this project so far, both between the partners of Transforming Communities: Glasgow and most importantly, with the local residents and our delivery partners New Gorbals Housing Association and Urban Union.”

A community owned and controlled organisation, committed to providing tenants with the highest possible quality housing and environment, NGHA’s chairperson, Raymond Shannon, commented: “It is fitting that the biggest ever grant-funded social housing handover is in the Gorbals.

“Our community is now responsible for the design, building and management of such projects and that is what will make this regeneration a long-term success.”

Following the local rehousing of tenants and demolition of three of the four high-rise blocks on the central Laurieston site (between 2007 and 2009), NGHA in partnership with Glasgow City Council appointed Glasgow architects Page\Park and Elder&Cannon to design the new city centre quarter.

“The ambition for Laurieston was to create a beautiful new neighbourhood with a real ‘sense of place’ and I think, collectively, we have achieved that. The development will also integrate well with the 1970s tenements in the adjacent Eglinton Court.”

The landmark project was financed by Glasgow City Council and the Scottish Government with development consortium Urban Union appointed by the Council to transform the area in 2012.

“Our vision was to deliver quality housing for the people of Laurieston, using our fresh approach to building not just homes, but communities.

“We are delighted at how well this vision has been realised in Glasgow’s newest city centre quarter.

“As we enter the next phase of houses for sale we will continue to work closely with our partners and the local community to shape the ongoing development of this vibrant quarter, maintaining its rich cultural heritage while creating much needed modern contemporary amenities.”

The second phase, set to begin in September 2014, will include 69 new homes for sale by Urban Union and 39 for mid-market rent by NGHA.

A third phase is also in the pipeline – a further 55 new homes on the corner of Eglinton Street and Cumberland Street, on the site of the former church. This third Glasgow City Council funded phase by Urban Union will include 46 socially rented units for NGHA along with nine shared equity homes, providing a range of affordability options.

“As Glasgow’s original suburb, Laurieston has a rich and complex history which is a core part of the fabric of this closely knit community.

“We are proud to be involving local people at all stages of the regeneration process as we work to transform the area and perceptions of it, providing high-quality affordable city living at the heart of a revived urban city-centre quarter.

“There is no doubt this landmark phase, and the further planned regeneration, will have significant positive benefits for the existing and new community lasting long into the future.”

This opening of the social housing marks the first phase of the urban renewal in the area, which sits adjacent to the O2 Academy and the world-renowned Citizens Theatre. The future phases will include further homes for private sale with the potential for retail, hotel accommodation and community facilities. 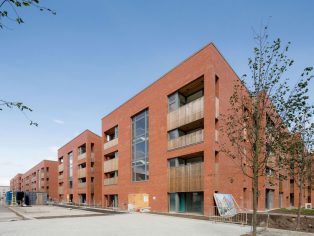