The urban regeneration of Laurieston, Glasgow, has been named Best Regeneration Project at the 2015 National Brick Awards.

The awards are in their 39th year and celebrate excellence in design and construction using brick. They are the most well established and most widely respected of their kind in the UK.

The Laurieston development was recognised as an immensely successful example of high quality social housing. The judging panel described Urban Union’s work as a shining example on how to regenerate an area and said they felt that this project had transformed the local area.

The completion of the first phase of the project, which was handed over in August 2014, was designed as collaboration between Page\Park Architects and Elder & Cannon Architects who were appointed by New Gorbals Housing Association, in partnership with Glasgow City Council, to design the new city centre quarter.

“Our ambition is to provide quality, desirable housing, creating a new world-class city quarter for the Laurieston community. As such we are tremendously proud to be recognised in this category for excellence in design and construction in brick.

“The development’s successful progression has been made possible, due to the commitment of our team and partners, including New Gorbals Housing Association and Glasgow City Council, as well as the local community who are working so hard to further develop this vibrant quarter of the city.” 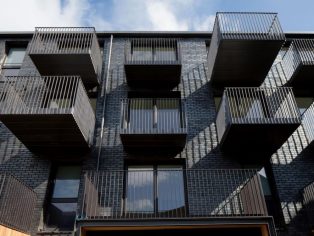