The urban regeneration of Laurieston, Glasgow, has been praised by the Royal Incorporation of Architects in Scotland (RIAS), by way of a Special Mention at the annual Andrew Doolan Best Building in Scotland awards ceremony.

The awards – supported by the late Andrew Doolan’s family and the Scottish Government – are recognised as one of the most prestigious architectural prizes in the UK and one of the most significant in Europe.

Projects shortlisted demonstrate innovation and design excellence, irrespective of size or type. Other key considerations include detailing, accessibility, environmental standards and technical skills. From the sixty five entries submitted to the 2015 RIAS Awards only twelve were shortlisted for the ‘Doolan’ which was eventually awarded to West Burn Lane, St Andrews.

The completion of the first phase of the project, which was handed over in August 2014, was designed as collaboration between Page\Park Architects and Elder & Cannon Architects who were appointed by New Gorbals Housing Association, in partnership with Glasgow City Council to design the new city centre quarter.

“Our vision is to provide quality housing for the people of Laurieston, building not just homes, but communities and deliver a new world-class city quarter.

“As the development progresses, we will continue to work closely with our partners, including Glasgow City Council, New Gorbals Housing Association and the local community to further develop this vibrant quarter of the city.”

The development was praised for its reinterpretation of the traditional Glasgow tenement, which are fittingly urban in scale and provide high quality high amenity homes, close to the heart of the city.

The affordable-rent homes, set in a layout of streets and mews, were identified as building on the urban character of Glasgow, comprising contemporary, supremely elegant clearly-defined blocks which reinforced the city grid.

“Laurieston is both a superbly development and an example of fantastic placemaking. It reinforces the grid of Glasgow and helps to remake Laurieston as a highly attractive place to live and to visit: a triumphant piece of urban regeneration.” 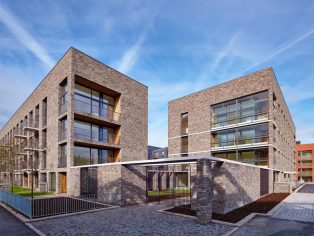