Government ministers, led by Vince Cable, are warning of ‘serious housing inflationary signs’, following an encouraging 1% monthly price rise for England and Wales in July and reports of a growing army of real estate workers.

RICS have added fuel to the fire by suggesting limiting house price inflation to 5% a year. However, data analysed by London Central Portfolio (LCP) has revealed that fears of a house price bubble are premature. In a fragile economic recovery, it would seem ill judged to dampen the small sparks of hope for many UK home owners.

According to the Government’s Office of National Statistics, average annual price growth in the UK has been 9.4% since 1969, the date from which the data is published. This represents a doubling of values approximately every seven years.

Current price growth is vastly under long term average. According to the Government’s other house price data set, the Land Registry House Price Index, published since 1996, growth has been just 0.67% per year over the last 7 years (July 2006 – July 2013). This equates to a fall in real prices of -3.1% p.a.

This compares with growth of 13.22% p.a. in the 7 years before (1999 – 2006). This reflected the recovery of the housing market after the price doldrums of the 1990s and a booming economy. Few, if any, commentators reported a bubble then, suggesting that house price rises were taken for granted in a dynamic economy.

LCP, who track price data from Land Registry and have observed this long term cycle of doubling prices on average every 7 years, reported back in 2006 that the housing market had corrected following the downturn in the 1990s. Indeed, growth started slowing that year, well before the credit crunch.

The dramatic fall in prices of 17% in 2009 was not a kick back from growth in the early 2000s but a result of the UK hitting a brick wall during a period of global meltdown. A significant uplift in prices can now be expected as the economy improves. This will be a market correction, not atypical inflation.

“Knee-jerk reactions to short term movements are not helpful and should be tempered by a proper understanding of market dynamics. Residential property prices in the UK move in cycles. Periods of growth are generally followed by periods of consolidation. A rise one year may be offset by a fall in the next. Capping growth at 5% a year, as RICS suggests, completely ignores this dynamic” says Hugh Best, Head of Investment at LCP.

Naomi Heaton, CEO of LCP, adds: “Any market manipulation has a dangerous precedent. The bust in 1989 was exacerbated by an artificial boom in sales created by tax changes introduced by the Thatcher Government, which coincided with a doubling of base rates to 15% in October 1989, with devastating consequences.” 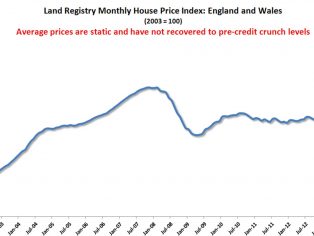