A new home at Horsforth Vale is to get its 15 minutes of fame showcasing a dream lifestyle in a BBC TV programme about lottery winners.

Location managers for The Syndicate, the new series of which has just started on BBC 1 (June 2), selected Redrow’s venture in Horsforth for its pretty scenery and luxury homes with traditional stone exteriors.

Written by Kay Mellor and starring Anthony Andrews, Alice Krige and Lenny Henry, among others, the series will focus on the ‘downstairs’ staff of a crumbling stately home and their lottery fortunes.

Scenes shot inside and outside a ‘Balmoral’ home at Redrow’s Horsforth development in January and involving two cast members, Elizabeth Berrington who plays Dawn Stevenson and Kieran O’Brien who plays her husband Andy, will feature in the sixth and final episode.

It was the new home of the Khan family that was chosen for the filming and they found it an incredibly smooth process from start to finish. Rehna Khan said:

“It was very exciting and such a nice story to tell family and friends. It’s quite flattering to have your home picked as a ‘dream home’!”

“I left the crew to it on the day and when I came home, you wouldn’t have known anyone had been there. I was a little bit worried about the new carpets etc but it was an incredibly positive experience. I can’t wait to see it on the television!”

Writer Kay Mellor has also co-directed the series and played a key role in selecting the four-bedroom detached Balmoral after seeing Redrow’s same style showhome. She also oversaw filming on the day and said:

“It is always very important to me to find the perfect location to fit with the story and I was ecstatic when I saw this house because it was ideal.”

Viewers will have to wait until July to see exactly where the Balmoral fits into the plot and how it’s connected to behind-the-scenes life at Hazelwood Manor.

Meanwhile, would-be home owners who’d like a Balmoral of their own won’t need to win the lottery. They will, however, need to find £534,950 to buy this large four-bedroom detached home, which boasts three en-suite bathrooms, a bright, airy kitchen/dining room, large lounge and study/family room as well as a detached double garage.

Other homes at Horsforth Vale are available from £314,950, with the development split into two outlets, The Green and The Limes. Each boasts two fully furnished showhomes which are open daily from 10am to 5.30pm. 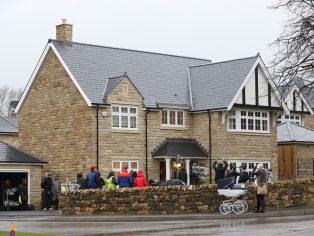 The filming taking place at the Balmoral home in Horsforth Vale