A booming Leicestershire-based housebuilder has expanded its business to create a whole new region.

A new team of 14 staff members are covering a range of roles at its new offices, with around 40 positions created overall including new site staff.

The new team includes Managing Director James Burnham, 39, from Market Harborough, who started his career in 2005 as part of the land team for David Wilson Homes. James joined Davidsons Homes as Land Director in 2012 and has now progressed to the role of Managing Director for the new region.

“I get a huge amount of satisfaction working with a superior product that stands the test of time.

“I’m very much looking forward to building on the existing reputation and quality created by the East Midlands region and growing the brand further in time.”

Tom Goldsworthy, 29, of Hinckley, has also joined the division as its new Head of Finance.

Following qualification as a certified chartered accountant in 2013, Tom joined Westleigh Developments as a Financial Controller during a period of high growth, before joining Davidsons Homes in November 2018.

“I’ve always admired the product and the Davidsons brand – it’s quirky and different to most other housebuilders.

“I’ve been really impressed with the culture of the business since joining.

“The company is very focused but still has a family feel, and it can move quickly and make decisions speedily which is a huge benefit when setting up a new region.”

New Head of Design Paul Waterfield, 37, from Ibstock, began his career at 16 as a carpenter and joiner for David Wilson Homes and soon moved up to the drawing office.

After working for several house builders Paul joined Davidsons Homes in 2012 as a Layout Designer, progressed to a Design Manager in 2016 and became Head of Design when the new region was created.

“I’m really enjoying being a part of such a period of change and growth within the company and helping to build it.

“We are all learning and growing.

“As part of my role I feel very lucky to have a hand in creating places for people to live in and enjoy for many years to come.”

Simon Tyler, 31, Head of Sales for the new region, from Rugby, joined Davidsons Homes in June 2018.

Prior to this Simon spent 10 years working between David Wilson Homes and Bloor Homes in senior sales roles.

“Every day is a challenge and I really enjoy the fact that no two days are the same – we are constantly evolving, changing and learning something new.

“I am very lucky to be a part of building a fantastic team who love the Davidsons Homes product, love their job and get real satisfaction from it.”

Further developments are planned in Northamptonshire and Buckinghamshire in the future. 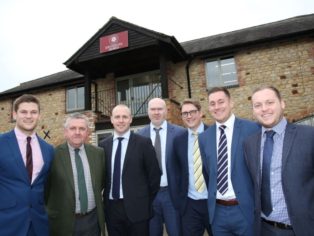