The construction of London’s ‘super sewer’ will mark the end to millions of tonnes of raw, untreated sewage overflowing the system and spilling into the Thames each year.

As the population of London reaches nine million, the need to construct the 25km Thames Tideway Tunnel to intercept, store and ultimately transfer sewage waste away from the River Thames is ambitious, but an ultimately necessary project for this great city.

Construction began in 2016, with completion planned for 2023, with the scheme already hitting several milestones. Only in June, the two Tunnel Boring Machine’s, Millicent and Ursula, were lowered underground. Weighing in at over 850 tonnes each, lowering the machines was a lengthy and complicated process and took approximately eight hours each.

We recently caught up with Steve Crofts, Head of Health, Safety and Wellbeing (HSW) at Tideway. He is responsible for supporting and guiding the Program Manager and Principle Contractors to enable them to deliver Tideway’s vision of transformational HSW performance.

Steve is speaking on 24th October at 15:00, and also takes part in a panel discussion on health and safety afterwards.

We began by asking him what the tunnel will mean for London:

“The Thames Tideway Tunnel will mean a cleaner, healthier river for London, by removing tens of millions of tonnes of raw sewage that overflows from the sewer system into the Thames every year.”

What innovative construction methods are used?

“All those working on the Tideway project are encouraged and assisted in their efforts to innovate, moving the industry forward and ensuring the success of the project.

“One innovation that has taken place is to use an electrically-powered hydrofraise to reduce noise during diaphragm walling activities, with another being the extensive use of virtual reality during Tunnel Boring Machine Design to help both design out health and safety hazards and to familiarise operatives with machines before delivery and operation.

“We even have an interactive and engaging full day induction for everyone on the project that utilises a permanent set and actors to ensure all are fully immersed in the day.

“On Tideway we were keen to see the early engagement of Occupational Hygienists at the design phase to ensure construction requirements consider operative’s health and are designed accordingly, and we have also been developing ‘Intelligent Tracking’, to monitor operative’s locations during exclusion zone activities and for the management of muster points.”

What have been the most significant challenges and successes regarding the HSW of the project?

“The biggest challenge so far has been ensuring that we avoid the initial ‘spike’ in incident rates that previous large infrastructure projects have experienced. Having successfully avoided this ‘spike’, the challenge now is to continue to improve our performance across the programme during the increasingly intense construction phases.”

Why is attending London Build important?

“We want to ensure the work we’re doing to lead the industry forward is captured and shared with as many as possible to ensure it has a lasting, positive impact.” 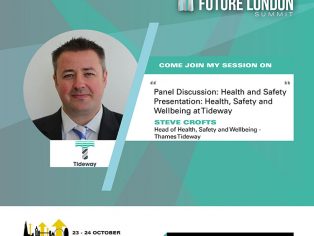