Manchester drives move to create a ‘London’ of northern England

Manchester’s rich history since the Victorian era ranges from rapid industrialisation to the creation of global football and music brands. Yet it is a new, still emerging, role that may be key to redefining the city and its housing market in the future. Manchester is now at the geographical and political centre of a drive to create a “northern powerhouse” — alongside Liverpool, Leeds and Sheffield — that would act as a north of England counterbalance to London’s economic and cultural domination of the south of the country.

The powerhouse idea, promoted this year in “Unleashing Metro Growth”, a report by former Goldman Sachs economist Jim O’Neill, has been seized upon by Manchester’s civic leaders. They have struck a deal with the UK government to emulate London by gaining more local control of transport, skills and policing, and electing a powerful mayor, despite the fact the city voted against such a post as recently as 2012.

In Manchester about 2,733 homes are in the process of being built, according to analysis by Knight Frank and building consultancy Glenigan, while planning consent has been secured for a further 3,937 homes. Meanwhile, in the Greater Manchester metropolitan area comprising 2.7m residents in 10 boroughs average house values have risen 3.92 per cent over the past year, according to property website Zoopla.

In the past three years MediaCityUK, a 200-acre site at Salford Quays on the Manchester Ship Canal, has become home to parts of the BBC and ITV broadcasting empires, as well as the University of Salford’s media department. The area has a Metrolink station — one of 92 on Manchester’s seven-line tram network — which is being expanded as part of the Northern Hub scheme.

“MediaCity has been a significant trigger for the housing market with more than 2,000 professionals from London. Several London law firms have opened regional offices in Manchester, too, bringing up more high-end buyers”

He says these purchasers have mostly sought homes in southern suburbs such as Hale, Altrincham and Wilmslow — locations that are also popular with footballers from Manchester’s two Premier League clubs, United and City. These suburbs are also within a short drive of Manchester airport, Britain’s third busiest airport (it handles 20m passengers a year).

Regenerated areas such as Salford Quays and Spinningfields show what the rest of Manchester may become in the future. In Salford, a three-bedroom waterside apartment near MediaCityUK is on sale for £599,000 through Jones Lang LaSalle (JLL), while at Spinningfields the same agency is selling a two-bedroom apartment for £349,950.

Steve Hogg of JLL’s Manchester office believes that such developments, plus the political and media interest in a potential northern powerhouse, possibly with a high-speed rail link connecting nearby cities has put Manchester on the map internationally. He says:

“We’re seeing Singapore, Hong Kong and Dubai investor interest, especially as capital appreciation predictions for Manchester for the next five years outstrip those for prime London”

“It’s taken a long time for this to happen,” says Hogg, “but there’s a real spring in the step of the residential market in Manchester now.” 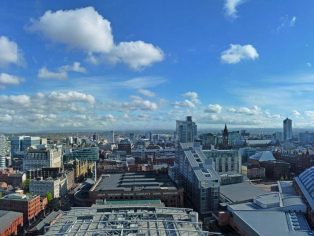