Redrow site manager Martin Caldwell has cemented his place at the top of the construction trade after taking the title of National Residential Site Agent of the Year.

The 35-year-old won the coveted award at the Grand Finals of the LABC Building Excellence Awards, held at the Westminster Park Plaza Hotel in London.

Boss of the builder’s Ricksby Grange development in Wrea Green Martin, from Lytham, had already secured the North-West accolade of LABC Site Agent of the Year earlier this year.

But his latest victory, hotly contested across 10 regions, sees him declared the best in the whole of the country.

“I am absolutely delighted – although the news hasn’t quite sunk in yet,” says Martin. “As I sat around the table at the awards ceremony I didn’t think, for one moment, I was going to win. I am only 35 and there was a lot of competition from site managers with many more years’ experience than me.

“So, yes, I was immensely proud but, as I always say, while it might be my name written on the award, it should really have all those of every person I work with, every member of my team, because they have won it too.  I couldn’t have done it without them.”

The LABC (Local Authority Building Control) Awards recognise outstanding working relationships between building companies and their managers with the local authorities and their surveyors; as well as build quality, control on site for technical awareness, good communication and management of safety.

The awards event is one of the most well-known and prestigious within the building industry. At the Grand Finals – attended by more than 800 building professionals – the winners were announced by writer, broadcaster, actor and former conservative MP Gyles Brandreth.

Martin, who already has two NHBC Pride in the Job Seals of Excellence – the first of which he won at just 23 – among a host of other awards, went on:

“The industry has changed. It’s not just about building houses these days, but about looking after the people you work with, your clients, health and safety rules, the cleanliness of the site, and so much more … and with Redrow rightly running such a tight ship, all of that becomes second nature.

“It does make my job more difficult of course, but it’s also helped me become national champion!”

Though he also added:

“I became a dad five months ago. To be honest my baby boy William was the best and biggest ‘award’ that either myself or my wife Lauren could have been given.”

“Martin has never given anything less than 100% to Redrow, and that’s at the heart of everything we do.

“Site managers like Martin make sure that the people who buy our homes can have absolute confidence in us from the moment they reserve a house to the minute they put the key into the door – and beyond.

“We are proud of him and all our site managers.”

Martin hopes to continue his career ever upwards with Redrow, aiming for project manager and contracts manager, meanwhile striving always for the next award. 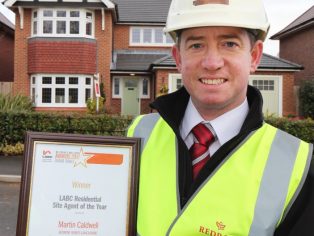