Mayor calls for emergency action on homebuilding in Budget

Sadiq Khan has today called on the Chancellor Phillip Hammond to take emergency action to support homebuilding in the Budget – including additional funding for affordable homes and devolution to London – amid growing concerns in the housing industry about the impact of Brexit.

Homebuilders are increasingly concerned that Brexit is already having an impact on homebuilding in the capital, and that this will only get worse over the coming months. Top of homebuilders’ concerns is continued access to the almost 100,000 skilled construction workers from the European Union who contribute invaluably to building the homes and infrastructure London so desperately needs. Research from the Construction Industry Training Board has shown that 42 per cent of London’s construction employers have already experienced the impact of Brexit, specifically suffering staff shortages, project delays and reduced levels of investment.

And now three in five of all construction employers in the capital believe there will be further negative impacts of Brexit over the next five years – including shortages of skilled workers.

Industry bodies are warning of the impending threat of a hard Brexit – with builders, architects and surveyors expressing deep concern about the impact on their workforce. The latest RICS Construction and Infrastructure Market Survey shows that 55 per cent of its members – who are leading professionals in housing and the construction sector – are reporting skills shortages as restricting growth, with a lack of quantity surveyors and bricklayers in London particularly acute. Research by the Royal Institute of British Architects shows that one in four architects and 13 per cent of architecture students in the UK are EU nationals, with over 80 per cent of RIBA members identifying access to international talent as being key to the profession’s future.

The National House-Building Council’s recent statistics showed the number of registrations of new homes in London in the last three months fell by 35 per cent compared to the same period last year, further underlining the fragility of the capital’s housing market whose growth in recent years has become over-reliant on expensive properties for sale. The Mayor released new figures last month revealing that London now needs an unparalleled 66,000 new homes every year.

Sadiq Khan is now calling on the government to take emergency action in this month’s Budget to give him the resources and powers he needs to support homebuilding in the capital through the turbulence of the Brexit process. This includes devolution of new powers to London such as greater control over public land and allowing councils to borrow to invest in homes, a massive increase in government funding for homebuilding and infrastructure, and full control over London’s skills and further education systems.

He believes this must go hand in hand with guarantees of the rights of EU nationals living in London and continued access to the Single Market when Britain leaves the European Union.

The Mayor of London, Sadiq Khan, said: “Homebuilders are increasingly worried that Brexit could make London’s housing crisis even worse.

“They are already feeling the impact of the government’s pursuit of a hard Brexit with an increasing skills shortage that is having a knock-on effect on the number of homes being built. The bad news is that this will only get worse unless we give EU nationals a cast-iron guarantee that they will have the right to remain post-Brexit.

“I fear the consequences of losing these 100,000 skilled workers would be catastrophic to London’s plans to build the genuinely affordable homes to buy and rent Londoners so desperately need.

“I urge the government to listen to the housing industry, who are clearly concerned. Ministers need to take emergency action and give me the powers and resources I need to lead a new building programme to properly tackle the housing crisis.”

Stewart Baseley, Executive Chairman of the Home Builders Federation, said: “More than anywhere else in the country, house building sites in London rely heavily on foreign labour. As house builders look to build more desperately needed homes in the capital the industry is ramping up recruitment and training, but it is essential we continue to have access to skilled labour. Housing output is increasing but reducing the supply of workers could threaten further increases.”

Melanie Leech, Chief Executive of the British Property Federation says: “London’s housing shortage continues to undermine the capital’s capacity to increase productivity and economic growth. We need all housing tenures firing on all cylinders to make meaningful change, but this will require protecting EU workers’ right to live and work in the UK. They make up a significant proportion of the construction sector’s workforce. We urge government to make a deal as soon as possible on EU workers’ right to be here, giving them the confidence to continue calling the UK their home and providing assurance to the construction sector so we can drive forward a much-needed, ambitious housebuilding programme.”

Paul Hackett, Chair of g15 – representing London’s largest housing associations – said: “As the largest providers of affordable homes in the capital, g15 members are concerned about a decline in EU construction workers linked to Brexit. Construction workers from other EU countries make up over a quarter of the bricklayers, plumbers and roofers upon whom we are reliant to build our homes.

“Our members are gearing up for a substantial increase in housebuilding, including a commitment to start 42,000 affordable homes in the capital by 2021. We wholeheartedly back the Mayor’s call for an early deal on the rights of EU nationals to continue to work in the capital.

Abdul Choudhury, London Policy Manager at RICS said: “Given EU workers make up a significant portion of London construction workers, and with over 50 per cent of EU nationals making up the workforce in some sites, the government must recognise their importance to the capital’s ambitions, or risk exacerbating the challenges we already face. RICS, working with its members and government are developing measures to address the shortfall, including attracting the next generation of construction workers, encouraging the right types of skills development pathways and improving productivity. However, these are long-term solutions and, in the short term, we must have access to existing EU workers in the economy and, if possible, the extended pool of employment in Europe.” 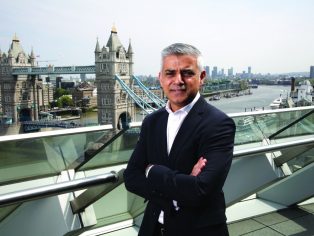