The Mayor of London, Sadiq Khan, has given the go-ahead to two developments which are set to deliver hundreds of genuinely affordable homes, demonstrating his determined approach to accelerating the delivery of new housing in London.

The applications were the first to be ‘called-in’ by the Mayor after they were refused permission by their respective borough councils. Both applications offer high-density schemes near well-connected transport hubs in outer London locations: Hale Wharf rises up to 21 storeys and is four minutes’ walk from Tottenham Hale (Zone 3), with the Palmerston Road development  going up to 17 storeys, three minutes from Harrow & Wealdstone (Zone 5).

Plans for Palmerston Road in Wealdstone include 186 homes, of which 41 per cent will be affordable (74 homes), while the scheme at Hale Wharf in Tottenham Hale will deliver 505 homes, with at least 35 per cent affordable (177 homes) – increased since the Mayor first saw the scheme from nine per cent.

“Having carefully considered all the evidence available to me, I am confident both these high-density developments will deliver hundreds of the much-needed, genuinely affordable homes Londoners need in areas of the capital ripe for further development.

“We’ve worked with the applicant on the Hale Wharf scheme in Haringey to increase the level of affordable housing and ensure the project will not encroach on our precious green belt, as was the case in earlier designs.

“The development at Palmerston Road in Harrow also offers a high level of affordable housing, which is particularly important as we move towards my long-term strategic target of 50 per cent affordable.

“Both schemes are close to transport links and this is one of the key factors in determining where major housing developments should be built. Building the homes Londoners urgently need will mean town centres and suburbs becoming denser, so we expect developers to continue to come up with high-quality designs which don’t have a negative impact on their surroundings.”

City Hall planners processed the applications quickly and both took around two months to reach the Mayor for his final decision – significantly faster than under the previous mayoralty, where schemes coming before the Mayor took on average three times as long to get there (1).

(1)    The hearing for both applications took place within 65 days of the Mayor’s decision to call them in. For planning applications that the previous Mayor decided at hearings, the average time from the point of the decision to take them over was 177 days. 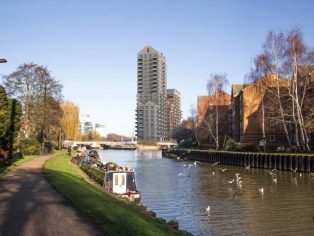