Work to provide more homes for modest and middle income-earners in Hammersmith & Fulham (H&F) shows no sign of slowing down after approval was given for affordable properties to be built as part of a new Rational House project.

The proposal – to create a three storey building containing a one-bed and five two-bed flats on an under-utilised piece of land in Fulham’s Barclay Close Estate – has been given the go-ahead by the council’s planning applications committee.

Cllr Andrew Johnson, H&F Council’s cabinet member for housing said that three of the six homes built will be offered first to local people who are on the borough’s Home Buy register.

“We’re acutely aware that there are many hard-working people living in the borough who are desperate to buy their own home and we are doing what we can to help them take their first step on the housing ladder.

“With Barclay Close’s Rational House project, half of the available homes will be affordable housing. So, modest and middle income-earners in H&F who may ordinarily be priced out of the market will have an opportunity to purchase their first property at a discounted market rate.

“The borough may have the third highest property prices in the UK, but we are always looking to create more opportunities for aspirational first-time buyers to buy their own place at a decent price.”

The Rational House product sees ultra-modern homes built in a factory off-site using pre-made panels. Once finished, they are winched into position in a matter of days.

And, because they are constructed off-site, the impact on the local community in terms of noise, dust and traffic movements is kept to a minimum.

A home built in this way already exists in the borough. The three bedroom property in Biscay Road, Hammersmith, took just 11 days to erect in 2011.

Later this year, 10 state-of-the-art ‘Rational Houses’ are due to be built on the Spring Vale Estate. Six of these homes will be sold at a discounted market rate to potential first-time buyers on the council’s Home Buy register.

The method of construction adopted by the Rational House product is ideal for building high-density low-rise development – making it perfect for a tight urban borough like H&F.

In total, the council intends to build several hundred new homes on council land over the next five to ten years through a variety of means. Further sites have been identified and could lead to the construction of up to 100 new Rational Houses.

H&F has promised to work very closely with local residents ahead of any development and will hold various consultation events so that residents can come and talk to council representatives face-to-face.

H&F is an incredibly polarised borough as far as housing is concerned. 31 per cent of homes in the borough are social rented – well above the London average. There are also a large number of multi-million pound homes.

However, less than 2 per cent of the borough’s housing is affordable low-cost home-ownership meaning that it is almost impossible for young people to get onto the property ladder unless they are earning a large salary or are sitting on a large inheritance.

H&F Council is determined to bridge the gap, which is why it has returned to building homes on council land.

More than 5,700 people have asked the council to help them find low cost homes to buy in the borough, while 784 people sit on the council’s social housing register.

To find out more about low cost home ownership opportunities in Hammersmith & Fulham, contact the council’s Home Buy team on 020 8753 6464 or register online at www.lbhf.gov.uk/homebuy. 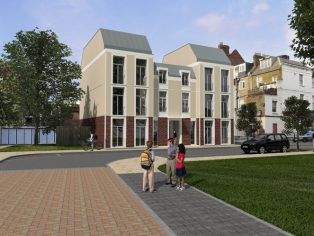