Hill, the award-winning top 20 UK housebuilder, is to undertake a major new regeneration scheme at Lea Bridge Road in East London, after winning planning approval from the London Borough of Waltham Forest.

The residential led mixed-use development has a GDV of £100million and will create 300 new homes, including 62 affordable properties. The development is a significant milestone for Hill, which has a growing pipeline of projects in London, and demonstrates the housebuilder’s growing reputation within the industry for major urban regeneration projects.

Situated between the major destination centres of Stratford, Walthamstow and Lea Valley, the development is adjacent to the recently re-opened Lea Bridge Rail Station, where trains to Stratford and Tottenham Hale take approximately five minutes. The Victorian station first opened in 1840, but closed in 1985, and re-opened in May 2016. The site will also benefit from new cycle routes due to be created through Transport for London’s ‘Mini Holland’ scheme, which aims to increase cycle travel through the borough.

“East London remains one of the Capital’s most exciting areas for regeneration. We’re tapping into this growing momentum, bringing homes, offices and a host of amenities to an area which previously suffered due to a lack of investment. Working closely with the London Borough of Waltham Forest, these proposals will breathe new life into the area, becoming a catalyst for further regeneration and investment. This site is just the latest instalment of our growing London portfolio and we are set to announce further new schemes across the Capital this year.”

Hill will start work on site in autumn 2016 and will complete the development in summer 2019. The first apartments will be launch for sale in early 2018. 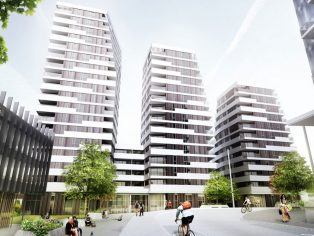