Robertson, one of the UK’s largest privately owned infrastructure firms, has announced Garry Hope as the new regional managing director of its operations in North East England.

The appointment follows the promotion of Andy McLeod from the role to managing director of Robertson Construction England. Andy, who has been with the firm for nine years, will oversee Robertson’s three English regional businesses in his new position.

Garry has worked in the construction industry for almost 40 years, starting at Wimpy Construction as a management trainee. He was also with Miller Construction for 26 years, increasing its northern region’s turnover from £5 million to £85 million as area director.

“Garry’s exceptional experience, and his standing in the construction sector throughout the North East makes his appointment to Robertson a real coup.

“As a Group Robertson employs over 1700 people throughout the UK. Our strategy for growth utilises a regional business model and Garry’s role will include the continued development of the Robertson business in the North East of England.

“We are delighted to welcome him to the team and look forward to working with him as we continue to secure more projects and expand our presence in the region.”

“I’m delighted to be joining such a reputable company as Robertson Group. There is some exceptional talent within the organisation, and it takes a very family-orientated approach to business, which I have always thrived on.

“I look forward to building on the great work Andy has achieved with the North East region.”

Robertson Construction England is part of Robertson Group, the privately-owned portfolio of individual companies working in infrastructure, support services and construction throughout the UK.

Robertson Group is nearing the end of a five year plan to diversify and expand geographically, focusing on growing profitability. 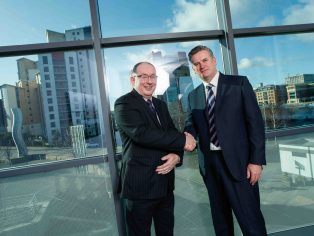