With a background in land acquisition, Chris Lilley is keen to lead the expansion of Redrow’s South East Division in his new role as managing director.

Chris, who started out as a management trainee in 1989 with Bryant Homes, has 14 years’ management experience.

“I’m delighted to have the opportunity to work for a company that takes such a pride in its product and has a clear purpose and strategy for growth. My main aims are to continue to expand the division and start work on some of the wonderful sites that have recently been purchased.”

With the South East divisional headquarters soon to be relocated to a new office in Kent, to oversee developments in Kent and East Sussex, its current headquarters in Laindon, Essex, will become home to the newly formed Redrow Eastern division, as the housebuilder continues to grow in the south of England.

One of soon to be12 company divisions operating across England and Wales, Redrow South East currently has eight live outlets with several new sites scheduled to open before the end of the company’s financial year this June.

One of the largest projects the South East team is working on is Ebbsfleet, where Redrow has permission to build up to 950 homes on land formerly owned by National Grid.

Ebbsfleet Green, close to Ebbsfleet International Station, will include 240 affordable homes; a site for a new primary school; a new local park, including sports pitches and tennis courts; community allotments; a local shop, a community hall, a hotel and a pub/restaurant.

Redrow will also make around £15m of Section 106 financial contributions toward local facilities and transport infrastructure, as well as health and education provision.

“Ebbsfleet Green is an exciting project and we’re keen to start work on site to help kick start the long-promised regeneration of the wider Ebbsfleet Valley area.”

“Our excellent partnership work with National Grid has paved the way for one of the region’s most exciting new developments and we very much look forward to seeing work commencing in the latter part of this year.”

Redrow recently received a fifth consecutive five-star award for customer satisfaction from the HBF, but Chris sees no room for complacency and is keen to build on the company’s reputation as a quality developer.

“We have a strong focus on improving customer care.”

“The industry is still facing a number of challenges, mainly in obtaining implementable planning consents and section agreements, so our challenge is to overcome these with the goal of opening more new outlets and expanding our presence in the local market place.”

Prior to joining Redrow, Chris’s most recent role was Midlands MD for Morris Homes and before that he spent eight years with David Wilson Homes, including the latter four as MD for the Midlands area.

Nationally Redrow builds around 3,500 new homes annually across England and Wales and directly employs 1,550 people. Its primary emphasis is building traditional, family housing from its Heritage Collection, but it also has a number of bespoke schemes, including luxury country homes and high value apartment schemes. 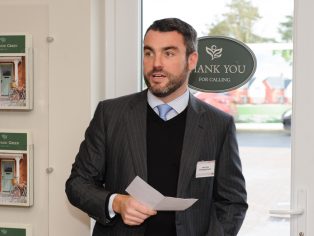