Norbord has announced a £95 million modernisation and expansion of its oriented strand board (OSB) mill in Inverness.

The investment will upgrade the mill to continuous press technology and nearly double its production capacity, positioning it to meet growing demand for OSB in markets across the United Kingdom and Europe, as well as securing the long-term future of its employees and the indirect jobs it provides across the region. The investment is further supported by a development grant from Highlands and Islands

Enterprise of up to €15 million
Karl Morris, managing director, Norbord Europe and a senior vice president of the company said:

“Demand for OSB is increasing rapidly and this investment will ensure we can continue to meet customers’ needs and remain at the forefront of the European industry.

“Our SterlingOSB product manufactured in Inverness is the UK’s leading OSB brand, and with direct road, rail and port access the reinvested mill will be in an even better position to efficiently serve our customers across the UK and in continental Europe. This investment underscores Norbord’s long-term commitment to Inverness and the Highlands region, and we look forward to continuing to play an important role in the community.”

Built in the early 1980s, the Inverness mill – at Morayhill, on the outskirts of the city – was the first in Europe to manufacture OSB, and was also the first OSB plant in Europe to receive Forestry Stewardship Council (FSC) accreditation, reflecting its commitment to the environment. The expanded mill – which Norbord expects to come online in the second half of 2017, with no disruption to production in the interim – will continue its commitment to sustainability, including generating its own heat energy from the biomass wood residue that is a by-product of the production process.

“This strategic investment reflects the importance and growth potential of our European operations, and will make our already strong European business an even more meaningful part of Norbord’s financial results.”

“We have been working very closely with Norbord on their development plans and are delighted to be supporting the company to invest so substantially in its Highland base.

“This development will put Norbord’s Inverness plant on a sustainable footing for decades to come, and is a huge vote of confidence in the company’s Scottish workforce. It’s worth noting that the positive impact of today’s announcement will be felt well beyond Inverness and the Inner Moray Firth. Norbord is not only a significant local employer in its own right, it also plays an important strategic role in the region’s forestry sector and is a major user of haulage companies and port infrastructure.”

OSB is an engineered wood-based structural panel designed for construction and other industrial uses, as well as for DIY use and in specialty products like furniture.

Norbord Profile
Norbord Inc. is a leading global manufacturer of wood-based panels and the world’s largest producer of oriented strand board (OSB). In addition to OSB, Norbord manufactures particleboard, medium density fibreboard and related value-added products. Norbord has assets of approximately US$1.6 billion (UK £1.1 billion) and employs approximately 2,600 people at 17 plant locations in the United States, Canada and Europe. Norbord is a publicly traded company listed on the Toronto Stock Exchange under the symbol NBD.

Highlands and Islands Enterprise
Highlands and Islands Enterprise (HIE) is an economic and community development agency implementing Scotland’s Economic Strategy across a region which covers more than half the country. With around 300 staff, HIE supports hundreds of client businesses and social enterprises; strengthens communities, particularly in fragile areas; develops growth sectors, and invests in infrastructure to create a more competitive and low carbon region. 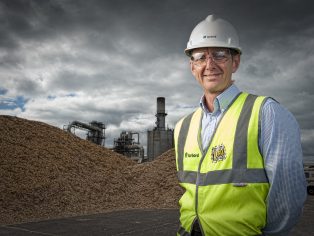 Karl Morris, managing director of Norbord Europe, on the site at Norbord's Cowie plant in Scotland. Norbord has announced a major capital project which will improve and extend its particleboard operations at Cowie. This project completes a £25 million reinvestment program in the particleboard operations. © John Young / YoungMedia 2010